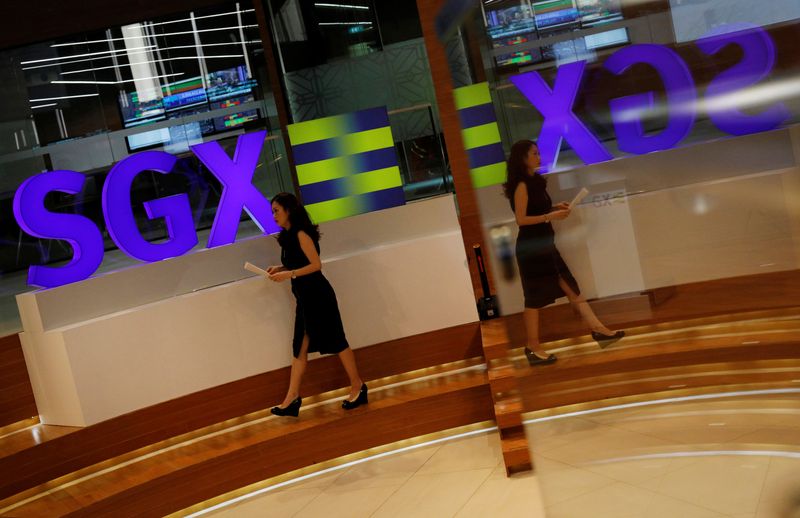 © Reuters. An SGX sign is pictured at Singapore Stock Exchange

SINGAPORE (Reuters) – Oil and Asian share markets extended losses on Thursday as the rapid global spread of the coronavirus kept investors on edge and seeking safety in gold and bonds.

Rising fears of a pandemic, which U.S. health authorities have warned is likely, had already wiped more than $3.6 trillion from global stock markets by Wednesday’s close.

China accounts for about 96% of cases and has instituted dire containment methods that have paralysed global supply chains.

But most new infections are now being reported elsewhere, with news on Thursday of a jump in cases in South Korea accompanied by a warning that the virus may be spreading in California..

MSCI’s broadest index of Asia-Pacific shares outside Japan () fell 0.5% and is down more than 4% for the week.

“The market was complacent until last week as central banks and governments were at the rescue,” said Desh Peramunetilleke, head of microstrategy at Jefferies in Hong Kong.

“The rising infection cases beyond Chinese shores has certainly raised the pandemic risk,” he said. “The current earnings estimates do not yet factor in such risk and are therefore vulnerable to further downgrades.”

A show of confidence from President Donald Trump, who sought to play down the risks to the United States at a White House press conference, offered little solace to traders focused on the virus’ spread.

The only bright spot, ironically, was China’s stock market, which steadied in relief that domestically, at least, the outbreak appears to be under control. ()

The virus has driven an enormous flight of assets out of Asia as investors try to isolate themselves from both the outbreak itself and the cost of what has now been more than a month of paralysis in the world’s second-biggest economy.

New Zealand’s government said on Thursday it might need to pump money into its economy, where China accounts for about a quarter of exports, should the fallout cause a global recession.

“The longer it continues, the more likely it is that some firms won’t be able to pay workers, and will have to either cut pay, lay people off or shut down altogether.”

The latest wave of selling has already driven the China-sensitive Australian dollar to a new 11-year low and pushed U.S. oil to a one-year trough, where they mostly sat on Thursday. [FRX/]

Last at 1.3088%, the yield on benchmark U.S. 10-year Treasuries is less than one basis point firmer than an all-time low hit overnight.