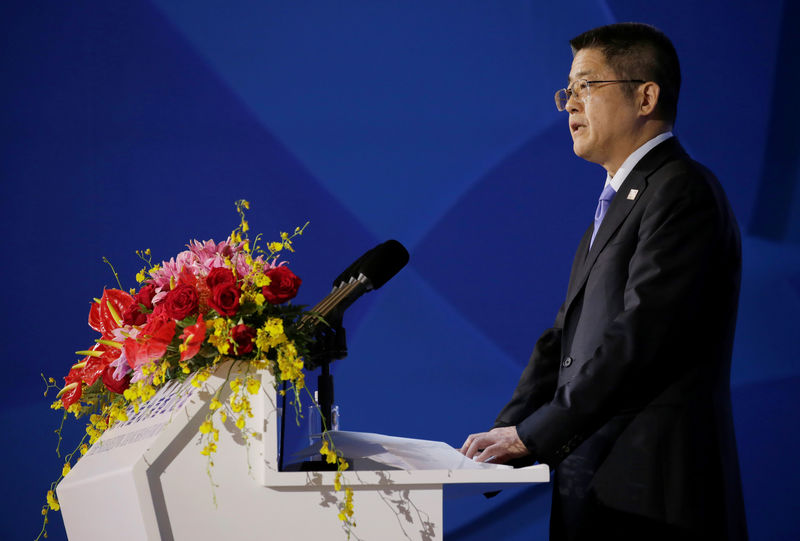 BEIJING (Reuters) – China and the United States have achieved some progress in their trade talks, Vice Foreign Minister Le Yucheng said on Tuesday, and any problem could be resolved as long as both sides respected each other.

No country can prosper without working with other nations, Le said at the Xiangshan Forum in Beijing, which China styles as its answer to the annual Shangri-La Dialogue security forum in Singapore.

The world wants China and the United States to end their trade war, he said. That required openness rather than a “de-coupling” of countries or a new Cold War.

China has been nervous that the United States is seeking to sever, or at least severely curb, economic ties in what has been called a “de-coupling”. Beijing fears that the Trump administration wants a complete separation with China.

The two countries have been working to resolve their trade dispute, with the United States announcing a “phase 1” deal with China on trade matters and suspending a scheduled tariff hike for October.

“As long as we respect each other and seek equal cooperation, there are no disagreements that cannot be resolved between China and the United States,” Le said.

“What China wants is to deliver a better life for the Chinese people. We don’t want to take anything from anyone else. There’s no such thing as China replacing anyone or threatening anyone,” he said.

China and the United States have accomplished much through cooperation over the years, Le said. “Why would we toss away the achievements of such cooperation?”

However, Le also warned that China would never trade away its core interests or allow other countries to undermine its security.

“No one should expect China to swallow the bitter consequences of undermining its interests, whether on the land or at sea, whether it’s Taiwan, Hong Kong, Xinjiang or Tibet,” he said.

China’s foreign ministry accused U.S. lawmakers last week of “sinister intentions” to undermine Hong Kong’s stability after they passed measures related to the anti-government protests that have rocked the city for months.

The Hong Kong Human Rights and Democracy Act, one of the measures passed by the U.S House of Representatives, would require the U.S. secretary of state to certify each year that Hong Kong retained its autonomy in order to receive special treatment as a major financial centre.

China would continue to safeguard its national security, Le said. The world had become safer and more peaceful because of China’s development, he said.

The trade war and uptick in China-U.S. tensions have unnerved countries around the region, who fear both the impact on their own economies and being forced to take sides.

“For small countries like Singapore, we watch with deep concern as larger powers position themselves more aggressively against each other,” Singapore’s Defence Minister Ng Eng Hen said at the forum.

The world needed both China and the United States to ensure stability and deal with challenges such as climate change, nuclear threats and terrorism, Ng said.

“Singapore will maintain its strong friendships with both and avoid choosing sides. But it is also acutely aware that the farther the U.S. and China pull apart, the harder it would be for all countries to keep to this principled and neutral position,” he said.

In comments to French news agency AFP in Paris, the Chinese government’s top diplomat State Councillor Wang Yi said the China-U.S. trade talks would not affect third parties nor come at the expense of China-Europe relations.

“As the world’s largest potential market, China is open to all countries,” Wang said, according to a transcript carried by China’s foreign ministry on Tuesday.