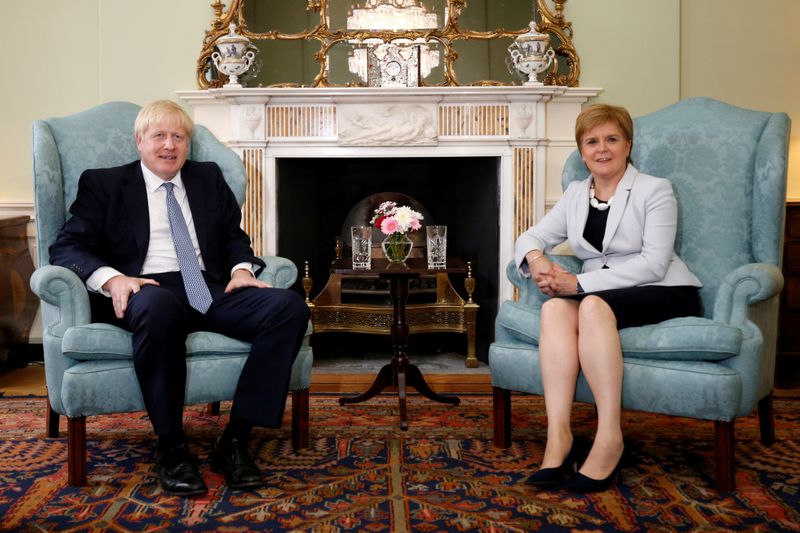 LONDON (Reuters) – Prime Minister Boris Johnson’s promise to take Britain out of the European Union next month could jeopardize a much older union: the United Kingdom which binds together England, Scotland, Wales and Northern Ireland.

After centuries of dreams about independence, Scottish nationalists now see Brexit as their ticket to secession, and Scottish First Minister Nicola Sturgeon is due to set out the case for a new independence referendum this week.

Her Scottish National Party (SNP) won 80 percent of Scotland’s seats in the UK parliament in last week’s general election, but Johnson’s government has repeatedly said it will reject any demand for another referendum.

Johnson says the question of Scottish independence was settled in 2014 when voters rejected independence by 55% to 45% in what was described as a once-in-a-generation referendum. Nationalists disagree.

Below are some of the paths to Scottish independence:

Scottish nationalists argue that the politics of England and Scotland are diverging and that Brexit fundamentally changes its constitutional arrangements.

Every region of Scotland voted to stay in the EU in 2016, while the United Kingdom as a whole voted to leave. Any economic damage from Brexit could fuel Scottish discontent.

As the law stands, to hold another referendum legally, Scotland needs the permission of the British parliament.

Sturgeon plans to submit a formal request to demand those powers, under Section 30 of the Scotland Act, to ensure any vote was legal.

However, the government has said it will reject any request. A similar demand was turned down after Scotland’s parliament in 2017 approved plans to demand a new referendum.

The nationalists’ best chance for a quick referendum rested on a hung parliament in the general election, where the SNP could have demanded a new referendum in return for supporting a minority Labour government.

Some Scottish nationalists believe that if the government continues to refuse to grant an independence referendum, it may ultimately benefit their movement.

The next big moment may come after an election to the devolved Scottish parliament due in 2021. If the SNP wins a majority then, it will be able to claim the political and moral right to hold another referendum.

Johnson’s top minister in Scotland said last month that if the SNP wins a majority in the Edinburgh parliament in 2021 this would constitute a “democratic mandate” for another vote.

Under the Scotland Act 1998 – which set up the Scottish parliament – “the Union of the Kingdoms of Scotland and England” is a matter reserved for Britain’s parliament.

This is widely interpreted to mean that any referendum on Scottish independence can only be approved with the permission of Britain’s parliament.

However, the matter has never been tested in court and some lawyers and academics have argued that the Scottish parliament could have the power to call a referendum.

Scotland’s Constitution Secretary Mike Russell did not rule out a legal challenge this week, saying “everything is on the table”. However, he said such a move was “not an argument for this week”.

Sturgeon has previously said she would only seek to secede from the United Kingdom through a properly agreed referendum.

But she is facing pressure from some nationalists to call a referendum without the British parliament’s permission.

A referendum held by Scotland, but not recognized by the government in London, would raise the prospect of the kind of anger and disarray in Spain over Catalonia. The government of Catalonia held an independence referendum two years ago that the central government said was illegal.

Sturgeon’s former adviser Kevin Pringle said over the weekend this could be an option.

“There could be a reasonable case for proceeding with legislative arrangements for a vote even if Johnson says no. The legality or otherwise of such a move has never been tested,” he said in an article in the Sunday Times.

However, this would undermine Scotland’s chances of joining the EU, which most Scots support. Spain could veto Scotland joining the EU if the secession process from the United Kingdom was illegal, wary of encouraging separatist forces in Catalonia.