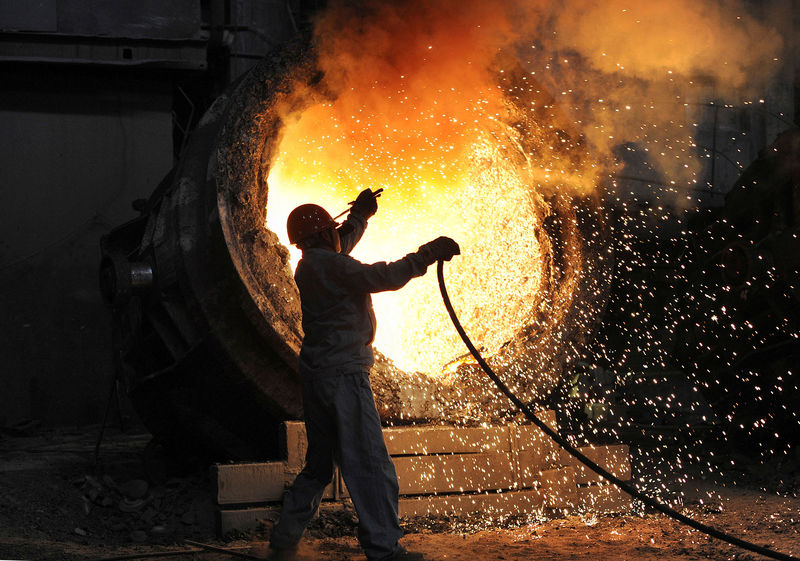 © Reuters. FILE PHOTO: An employee works at the Maanshan steel and iron factory in Hefei

By Jonathan Cable and Leika Kihara

LONDON/TOKYO (Reuters) – Factory activity shrank across much of Europe and Asia in June as the simmering U.S.-China trade conflict put further strains on the manufacturing sector, keeping policymakers under pressure to deploy stronger steps to avert a global recession.

A series of mainly downbeat business surveys and official indicators released on Monday followed Saturday’s warning by Group of 20 leaders who met in Osaka, Japan, of slowing global growth and intensifying geopolitical and trade tensions. The data was collected before the weekend summit.

The United States and China agreed at the summit to restart trade talks after U.S. President Donald Trump offered concessions including no new tariffs and an easing of restrictions on tech company Huawei, providing some relief to businesses and financial markets.

But analysts doubt the truce will lead to a sustained easing of tensions while lingering uncertainty could dampen corporate spending appetite and global growth.

“It’s too early to turn optimistic. The two countries just kicked the can down the road and there’s no knowing what could happen next,” said Yoshiki Shinke, chief economist at Dai-ichi Life Research Institute in Tokyo.

“Global manufacturing activity hasn’t hit bottom yet. U.S. business confidence, particularly that of manufacturers, has been weakening and if this continues, it may hurt economies across the world.”

Factory activity in the euro zone shrank faster last month than previously thought, in a broad-based downturn, according to IHS Markit’s Manufacturing Purchasing Managers’ Index (PMI), which also suggested there would be no quick turnaround. [EUR/PMIM]

Germany’s export-dependent manufacturing sector contracted in June for the sixth time in a row, Italian activity declined for a ninth month and Spain’s contracted at its fastest rate in more than six years.

France, the euro zone’s second-biggest economy, bucked the trend and activity grew at its fastest pace in nine months.

But against a backdrop of Brexit uncertainty and global trade tensions, British manufacturers suffered the sharpest fall in activity in more than six years, its PMI showed, adding to signs of economic weakness there. [GB/PMIM]

“The global manufacturing sector has continued to deteriorate which will weigh on export orders,” said Thomas Pugh at Capital Economics.

In China, Asia’s economic engine, the Caixin/IHS Markit PMI came in at 49.4, falling short of market expectations and the worst reading since January.

It was the first time in four months the keenly-watched index has fallen below the neutral 50-mark dividing expansion from contraction on a monthly basis.

Japan also saw manufacturing activity contract in June to hit a three-month low, offering fresh evidence of an economy under the pump as global demand weakens.

Separately, a Bank of Japan (BOJ) survey showed big manufacturers’ confidence hit a near three-year low, keeping its central bank under pressure to maintain or even ramp up a massive stimulus program.

In South Korea, factory activity shrank at the fastest pace in four months in June as the global trade slowdown deepened, prompting companies to cut production.

Activity fell in Malaysia and Taiwan, a sign the U.S.-China trade conflict’s impact on the rest of Asia was broadening.

In India and Indonesia, where factories are less dependent on external demand for business, activity continued to grow albeit at a slower pace.

Vietnam’s factory activity expanded at faster rate although new orders rose at their slowest since February. The Southeast Asian economy has been a rare beneficiary of the trade war as manufacturers shift their Chinese operations there to sidestep U.S. tariffs.

The U.S-China trade war has hurt business sentiment, threatened to disrupt supply chains and jolted financial markets, drawing warnings by policymakers over the widening fallout on the global economy.

International Monetary Fund Managing Director Christine Lagarde welcomed the resumption of trade talks between the two countries, but warned more needs to be done to resuscitate a global economy that had already hit a “rough patch”.

Heightening worries over global growth have forced some central banks, such as those in Australia, New Zealand, India and Russia to cut interest rates.

While G20 leaders said they stand ready to take further action to prop up growth, many major economies have little fiscal and monetary space to battle another recession.

Expectations of a U.S. Federal Reserve interest rate cut have put pressure on the European Central Bank and the BOJ to follow suit, despite their dwindling options to arrest stalling growth.

“If the Fed cuts rates, the BOJ and the ECB must do something more powerful to contain currency appreciation,” said Sayuri Shirai, a former BOJ policymaker who is currently a professor at Japan’s Keio University.