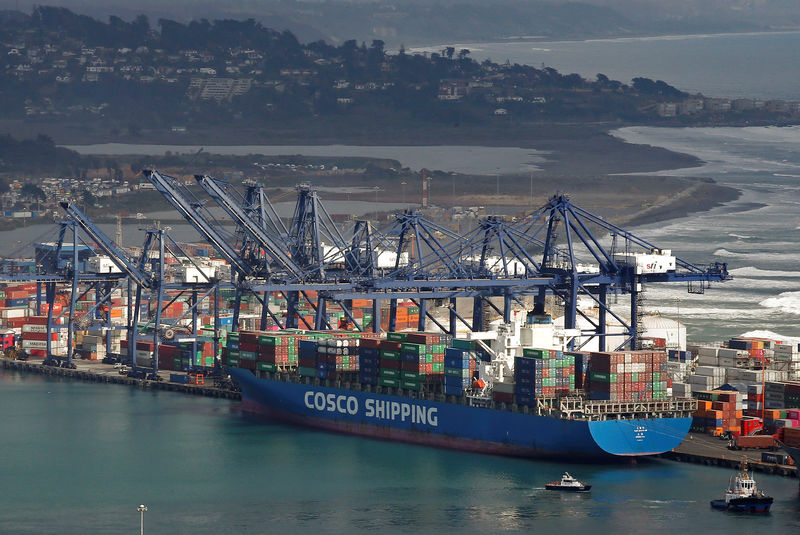 By Florence Tan and Chen Aizhu

SINGAPORE (Reuters) – Key oil freight rates from the Middle East to Asia jumped nearly a fifth on Friday, with the global oil shipping market spooked by fresh United States sanctions on units of Chinese giant COSCO for alleged involvement in ferrying crude out of Iran.

In what the State Department called “one of the largest sanctions actions the U.S. has taken” since curbs were re-imposed on Iran in November last year, two units of COSCO were named alongside other companies in claims of involvement in sanctions-busting shipments of Iranian oil.[

As some Asian oil buyers rushed to the shipping market to secure vessels, rates for chartering supertankers, or Very Large Crude Carriers (VLCCs), to bring crude oil from the Middle East to Asia surged nearly 19% overnight to about 75-76 points on Worldscale, an industry tool used to calculate freight charges.

But there was also uncertainty over how the sanctions on the COSCO units – COSCO Shipping Tanker (Dalian) Co, Ltd and its subsidiary COSCO Shipping Tanker (Dalian) Seaman & Ship Management Co, Ltd – will be implemented. Industry sources said some oil buyers were holding off hiring COSCO tankers while they check with legal teams to better understand the impact of the sanctions.

“The market is fearful of sanctions so refiners are taking some preventive measures. We’ll have to see how widely implemented the sanctions will be,” said KY Lin, spokesman for Taiwanese refiner Formosa Petrochemical (TW:), a major crude oil buyer in Asia.

Friday’s jolt left shipping rates springing back to levels not seen since mid-September drone and missile strikes on key Saudi Arabian oil production facilities roiled global markets. The COSCO vessels are equal to about 7.5% of the world’s fleet of supertankers, according to Refinitiv data.

“Charterers are in trouble,” a North Asian shipbroker said, declining to be named citing company policy. “It was terrible news for every one of us with the Saudi drone attack, and now the market has to deal with U.S. sanctions on COSCO.”

“Good news for owners, good time for them to earn money,” the broker said.

While diplomatic tensions between the United States and Iran remain high, Refinitiv ship-tracking data on Friday showed a British-flagged tanker that had been detained by Iran in the Strait of Hormuz had exited Bandar Abbas port.

“Rates have definitely been pushed higher by these sanctions,” said an executive at a top shipbroker in Singapore, adding that ships carrying Middle East and to Asia were subject to the biggest impact. The broker declined to be identified, citing company policy.

COSCO officials were tight-lipped on Friday.

“(The) company is assessing the situation and impact internally as soon as possible, but so far we don’t have anything to update you,” said Zhang Zheng, an investor relations official with COSCO Shipping Energy Transportation (HK:), parent of COSCO Shipping Tanker (Dalian) Co, Ltd.

Trading in shares of COSCO Shipping Energy Transportation was halted on Thursday after the news on the sanctions, and will remain halted on Friday.