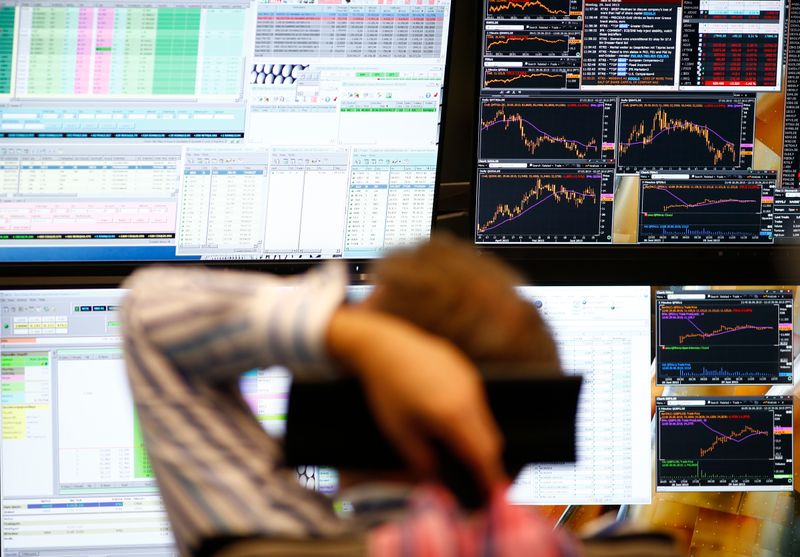 © Reuters. FILE PHOTO: A trader sits in front of the computer screens at his desk at the Frankfurt stock exchange

LONDON (Reuters) – World stock markets rose on Monday, trading a notch below a record high hit last week on the back of a preliminary trade deal agreed between the United States and China.

European shares built on the previous week’s gains. By midday in London, the pan-European index was up by 1.2% and touched a record high. Germany’s rose 0.6%.

Britain’s was up 1.14%, moving in tandem with a buoyant pound that rose 0.3%, adding to gains last week on the back of a landslide victory for Prime Minister Boris Johnson’s Conservative Party in the UK election.

U.S. stock futures also pointed to stronger gains to start the week, with the up 0.36%.

U.S. Trade Representative Robert Lighthizer said on Sunday a deal was “totally done”, notwithstanding some needed revisions, and would nearly double U.S. exports to China over the next two years.

The “phase one” agreement suspended a threatened round of U.S. tariffs on a $160 billion list of Chinese imports that was scheduled to take effect on Sunday. The United States also agreed to halve the tariff rate, to 7.5%, on $120 billion worth of Chinese goods.

“There’s going to be a lot more going forward. This agreement is dependent on the degree to which the Chinese comply. This conversation will continue as there’s so many issues. It’s not just about trade. Its about technical issues, know-how, technology…So there’ll be a continuing situation.”

The 17-month-old trade dispute between the world’s two largest economies has buffeted financial markets and taken a toll on global economic growth.

Euro zone business growth remained weak in December, with tepid foreign demand exacerbating a contraction in manufacturing and offsetting a slight pick-up in services activity, although some analysts saw signs of stabilization.

Positive sentiment helped push MSCI’s All Country World Index up 0.25%. The index, which tracks stocks across 47 countries, reached an all-time high on Friday when the trade deal was agreed.

Earlier in Asia, MSCI’s broadest index of Asia-Pacific shares outside Japan to its highest level since April 18. It was last up 0.14%.

Japan’s succumbed to some profit-taking, falling 0.29% after surging 2.55% to a 14-month closing high on Friday.

Ryan Felsman, senior economist at CommSec in Sydney, said the trade deal and the receding risk of a disorderly Brexit after the British election yielded a strong Conservative majority provided support for sentiment in Australia.

A lower-than-expected Australian budget surplus due to a sluggish economy has also “built expectations by markets for further easing from the Reserve Bank (of Australia)”, he said.

Chinese investors initially had a more tepid reaction to the trade news, with the blue-chip CSI300 index struggling to rise further after trade hopes fanned a near 2% rise on Friday.

But after a lackluster morning session, the CSI300 index turned higher and was last up 0.5%, helped by data showing the country’s industrial output growth and retail sales jumped more than expected in November.

Felsman at CommSec said investors wanted more details and the reduction in U.S. tariffs may have disappointed some looking for more aggressive action.

“Certainly there were expectations perhaps that the rollback would be more significant than just 50%,” he said.

Oil prices, which had risen on Friday following the China-U.S. deal, hovered near three-month highs. was higher by 0.3% at $65.35 per barrel, and U.S. West Texas Intermediate crude was flat at $60.05 per barrel.