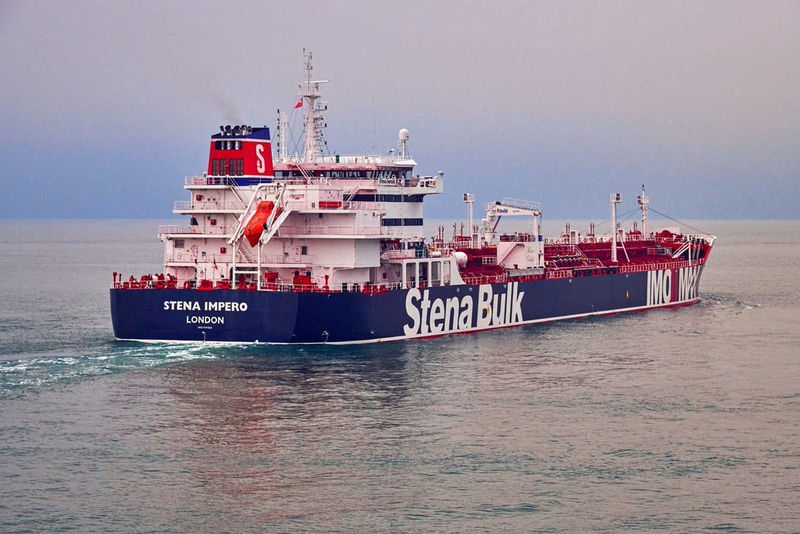 By Babak Dehghanpisheh and William Schomberg

GENEVA/LONDON (Reuters) – Iran said on Saturday it had seized a British-flagged oil tanker because it was involved in an accident, an explanation Britain rejected, calling the move a “hostile act”.

The action by Iranian Revolutionary Guards in the global oil trade’s most important waterway came two weeks after Britain seized an Iranian tanker accused of violating sanctions on Syria. It is certain to be viewed in the West as a military escalation after three months of confrontation which has already taken Iran and the United States to the brink of war.

Iran’s Fars news agency said elite Revolutionary Guards had taken control of the Stena Impero in the Strait of Hormuz on Friday after it collided with an Iranian fishing boat whose distress call it ignored.

The vessel, carrying no cargo, was taken to the Iranian port of Bandar Abbas. It would remain there with its 23 crew — 18 of them Indians — while the accident was investigated, Iranian news agencies quoted the head of Ports and Maritime Organization in southern Hormozgan province, Allahmorad Afifipour, as saying.

The strait, between Iran and the Arabian peninsula, is the sole outlet for exports of the vast majority of Middle Eastern oil, and the seizure sent oil prices sharply higher. The United States, which tightened sanctions against Iran in May with the aim of halting its oil exports altogether, has been warning for months of an Iranian threat to shipping in the strait.

France and Germany joined Britain in condemning the seizure.

The three big European countries are signatories to a 2015 nuclear deal between Tehran and world powers that Washington undermined by quitting last year, setting Iran’s already fragile relations with the West on a downward spiral.

“We have learned with great concern of the seizure of a British vessel by Iranian forces,” France’s foreign ministry said. “We strongly condemn it and express our full solidarity with the United Kingdom.”

A German foreign ministry spokesman said further escalation of regional tensions “would be very dangerous (and)… undermine all ongoing efforts to find a way out of the current crisis.”

U.S. President Donald Trump said on Friday he would talk to Britain about the seizure.

Under the pact, Iran agreed to restrict nuclear work in return for lifting sanctions. The European countries opposed the Trump administration’s decision to abandon the agreement last year, but have so far failed to fulfill promises to Iran of providing alternative means for it to access world trade.

Britain’s Foreign Secretary Jeremy Hunt said London’s reaction to Friday’s tanker seizure would be “considered but robust”, and it would ensure the safety of its shipping.

He accused Iran of a tit-for-tat response after the seizure of Iran’s Grace 1 tanker in the British territory of Gibraltar at the mouth of the Mediterranean on July 4.

“Yesterday’s action in Gulf shows worrying signs Iran may be choosing a dangerous path of illegal and destabilizing behavior after Gibraltar’s legal detention of oil bound for Syria,” Hunt said on Twitter on Saturday.

On Friday, Hunt said the solution would be found via diplomacy and London was “not looking at military options.” Britain’s government said it had advised British shipping to stay out of the Hormuz area for an interim period.

“NOT LOOKING FOR WAR”

The past three months of escalation have seen the United States and Iran come as close as ever to direct military confrontation. In June, Tehran shot down a U.S. drone, and Trump ordered retaliatory air strikes, only to call them off just minutes before impact.

Since British Royal Marines abseiled from a helicopter to seize the Iranian tanker on July 4, a number of Iranian officials had threatened to retaliate. After maintaining his silence for more than a week, Iran’s Supreme Leader, Ayatollah Ali Khamenei called the British action “piracy”.

A senior politician and Revolutionary Guards commander, Major General Mohsen Rezai, said on Twitter that Iran was also not looking for war, “but we are not going to come up short in reciprocating”.

In New Delhi, India’s foreign ministry said it was actively seeking the release of its nationals among the crew.

Operator Stena Bulk said on Friday the tanker had been “in full compliance with all navigation and international regulations”, but could not be contacted. It had no further comment early on Saturday.

The vessel had been heading to a port in Saudi Arabia and suddenly changed course after passing through the strait.

The United States has blamed Iran for a series of attacks on shipping around the Strait of Hormuz. Tehran rejects the allegations. Washington also said it had this week downed an Iranian drone near where the Stena Impero was seized.

The United States is sending military personnel and resources to Saudi Arabia for the first time since the U.S. invasion of Iraq in 2003.