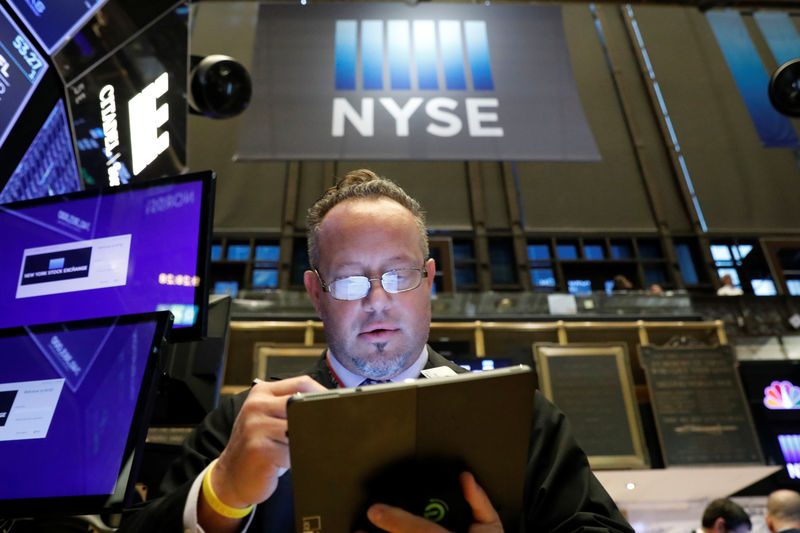 NEW YORK (Reuters) – The benchmark S&P 500 index gave up modest gains on Tuesday from earlier in the session after British lawmakers rejected the government’s proposed timetable for passing legislation to ratify its deal to exit the European Union.

Of the 98 S&P 500 companies that have reported results so far, more than 80% of them have beaten Wall Street estimates, according to data from Refinitiv. Still, analysts project the first earnings contraction since 2016.

“With a lower bar, earnings aren’t really coming in that great,” said Matthew Miskin, co-chief market strategist at John Hancock Investment Management in Boston. “They’re not going to cut it to get the market popping out of its trading range.”

The Dow held on to slight gains, thanks to boosts from Procter & Gamble, United Technologies and Boeing Co (N:).

Boeing shares rose after United Technologies’ chief financial officer said that the company believed Boeing would make 737 MAX planes at its current rate for the rest of the year. They pared gains slightly after the New York Times reported that the company’s executive in charge of commercial airplanes was expected to leave the company. Boeing shares were last up 2.1%.

The Nasdaq was pressured throughout Tuesday’s session as shares of technology () and communication services () stocks lagged. Facebook (NASDAQ:) shares, which dropped 3.5%, weighed most heavily on the index as the social networking company faced an expanding probe into allegations that it put consumer data at risk and pushed up advertising rates.

Even with the afternoon’s declines, the S&P remained above 3000 and was less than 1% from its record closing high in July.

“There’s some disappointment from Brexit,” said Tim Ghriskey, chief investment strategist at Inverness Counsel in New York. “But I don’t think it has a huge impact on the U.S. market.”

Conversely, Hasbro Inc (O:) shares dived 16.5% as the toymaker’s profits, which have been pinched by U.S. tariffs on Chinese imports, came in well below Wall Street estimates.

Advancing issues outnumbered declining ones on the NYSE by a 1.52-to-1 ratio; on Nasdaq, a 1.01-to-1 ratio favored decliners.