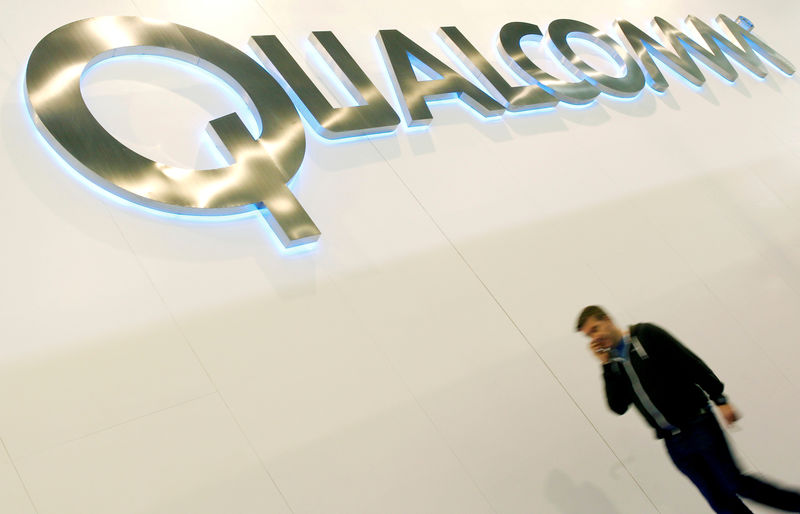 © Reuters. FILE PHOTO: A man walks past a Qualcomm advertising logo at the Mobile World Congress at Barcelona

(Reuters) – Qualcomm (NASDAQ:) Inc on Tuesday asked a federal judge not to enforce her decision that it illegally squeezed out rivals in the smartphone chips market as it plans to file an appeal that could take more than a year to wind through the courts.

In a filing in federal court in San Jose, California, Qualcomm said that it believes it can succeed in appealing the May 21 decision by U.S. District Judge Lucy Koh in an antitrust case brought by the U.S. Federal Trade Commission in January 2017. The company has not yet filed that appeal; Tuesday’s filing only concerns whether the ruling’s provisions will be put on hold temporarily as it plays out.

Qualcomm argued that Koh’s ruling raised “serious legal questions” because, among other things, she excluded evidence after a March 2018 cutoff date – including the fact that Apple Inc (NASDAQ:) dropped Qualcomm in favor of rival chip supplier Intel Corp (NASDAQ:), showing that Qualcomm did not have a stranglehold on the market. Qualcomm also said that the FTC’s theory in the lawsuit – that Qualcomm’s patent licensing practices amounted to a “tax” on smart phone makers, generating profits that Qualcomm then put to work undercutting its rivals – was unprecedented in antitrust law.

Qualcomm said Koh’s ruling would force it to rework its license deals and even offer deals to rival chip suppliers, scrambling its business in a way that would be impossible to unwind if it wins on appeal. Qualcomm shares shot up 23% in April when it resolved a legal conflict with Apple but then declined 15% after Koh’s ruling.

“After radically restructuring its business relationships, Qualcomm will not be able to return to its pre-injunction business in an orderly fashion,” the company said. “Nor will it be able to unwind licensing agreements it has renegotiated in the shadow of an order that is later overturned.”

FTC officials did not immediately return a request for comment. Hours before the filing, FTC Commissioner Christine Wilson, who was appointed by President Donald Trump, wrote a commentary in the Wall Street Journal calling Koh’s ruling “alarming” and calling for it to be revisited.

“Speaking for myself, and not for the FTC or any other commissioner, I encourage higher courts to reconsider the wisdom of the judge’s conclusions,” Wilson wrote. “In the interim, I write to make clear to businesses, fellow antitrust enforcers abroad, and law students my opinion that this ruling is both bad law and bad policy.”

San Diego-based Qualcomm makes cellphone processors and modem chips, but generates most of its profit by licensing its technology to mobile phone makers.

Koh ruled that Qualcomm’s patent licensing practices had “strangled competition” and directed the company to renegotiate licensing agreements with customers at fair prices without threatening to cut off supplies.

She also ruled that Qualcomm must offer to license its patents on fair terms to rival chipmakers such as MediaTek Inc. Qualcomm currently licenses its patents to device makers. Shifting to licensing to other chip suppliers could reduce Qualcomm’s royalties from as much as $20 per phone to just a few dollars per device.

The judge also said Qualcomm could not enter exclusivity agreements that block rivals from selling chips to smartphone makers such as Apple and Samsung Electronics (KS:) Co Ltd. Koh required Qualcomm to be monitored for seven years to ensure it complied with her remedies.

If Koh reject’s Qualcomm’s request to put the ruling on hold during the appeals process, Qualcomm will then ask the U.S. Ninth Circuit Court of Appeals to do the same. The company’s appeal on the legal merits of the ruling will proceed even if it loses its request to put its provisions on hold as the process plays out.

Qualcomm had argued during a 10-day non-jury trial before Koh in January that it became dominant in the market for smartphone chips through technological leadership, not freezing out rivals.