A SpaceX launch Monday successfully deployed the next batch of Starlink internet satellites, ahead of a surge next year that could enable some operational capability.

A Falcon 9 rocket lifted off at 9:56 a.m. ET from the Kennedy Space Center at Cape Canaveral, Fla.

About five minutes later, the fairing, or nose cone, deployed to mark the first time it was reused. And three minutes after that, the first-stage booster landed on SpaceX’s drone ship, marking the first time the primary stage of a Falcon 9 rocket has been launched and recovered four times.

About one hour after liftoff, the fairing released 60 Starlink satellites, which were separated at an altitude of about 174 miles. They will disperse over the coming days, then use ion thrusters to reach their higher operational altitude over the coming weeks.

A SpaceX launch in May deployed an initial set of 60 prototype satellites. Since then, the company has said five will come out of orbit, including three due to malfunctions and two for deorbiting tests.

After Monday’s SpaceX launch, the pace of Starlink deployments is expected to pick up sharply. In September, COO Gwynne Shotwell said she hopes to see 24 Starlink missions in 2020 alone. 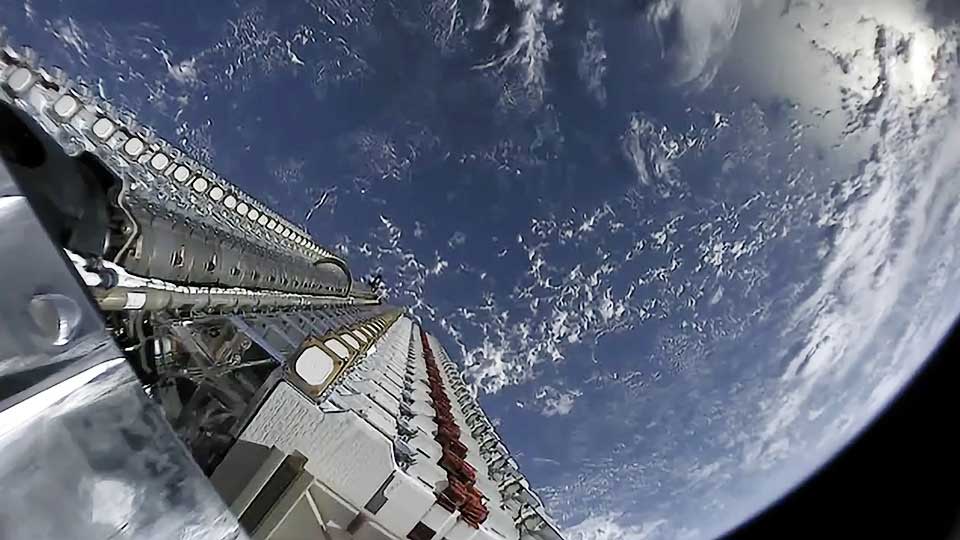 A SpaceX launch in May deployed an initial set of 60 prototype satellites. (SpaceX/Starlink Mission)

Last month, she said SpaceX could start offering broadband service in the U.S. by in mid-2020, after completing six to eight Starlink launches, presumably carrying about 60 satellites each. But the company has to finish the ground-based user terminals for that to work, she noted.

SpaceX has said it needs 400 Starlink satellites for “minor” broadband internet coverage and 800 for “moderate” coverage. Based on recent International Telecommunication Union filings the company eventually plans to deploy over 40,000 satellites to offer space-based internet service.

But even the limited number of Starlink satellites in orbit currently was enough for SpaceX and Tesla (TSLA) CEO Elon Musk to send a tweet via a terminal at his house on Oct. 22.

The fairing for the Monday’s SpaceX launch was used for the Falcon Heavy ArabSat 6-A mission in April. But SpaceX didn’t attempt to recover it again today due to high seas.

Each fairing costs about $6 million, and Shotwell said last year that it’s “soul-crushing” to throw away payload fairings.

Reusability is a key component to SpaceX’s business model as it is able to charge lower prices for launches by reusing hardware.

Reusing boosters will also help ramp up the SpaceX launch pace that would be necessary to put enough Starlink satellites into orbit for operations.

The space-based internet has the potential to be a lucrative business, but SpaceX faces a number of competitors including OneWeb, Amazon (AMZN) and Boeing (BA) with their own satellite constellations.

While Starlink could provide consumers with space-based broadband service, the U.S. military is already interested.

In October, Shotwell said the company is in talks with the Army about using the Starlink satellites. Last year, the Air Force Strategic Development Planning and Experimentation office gave SpaceX a $28 million contract to see how the service could use Starlink.

Boeing shares jumped 4.55% to 366.96 on the stock market today after saying it expects to start delivering 737 Max jets again in December, with service returning the following month.