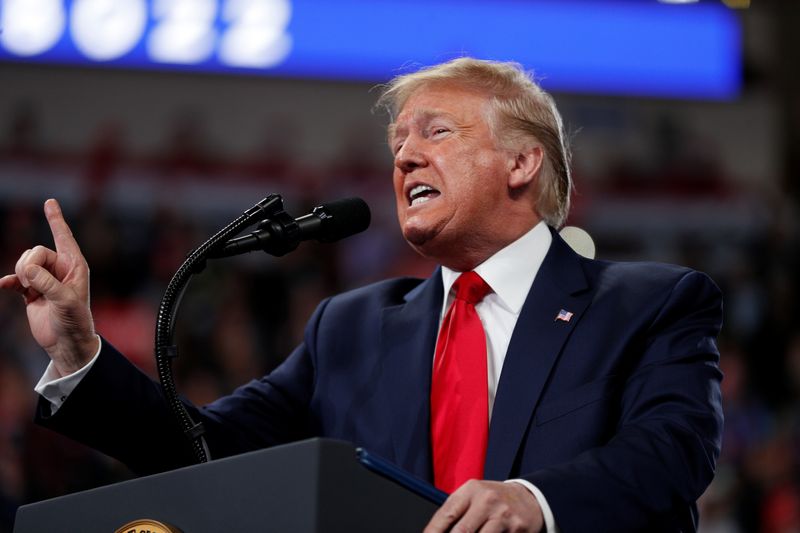 HERSHEY, Pa. (Reuters) – U.S. President Donald Trump on Tuesday blasted House Democrats for announcing an agreement to pass a revamp of the decades-old North American trade deal on the same day they unveiled articles of impeachment against him.

Speaking to a boisterous crowd in Hershey, Pennsylvania, Trump said House of Representatives Speaker Nancy Pelosi sought to use the United States-Mexico-Canada Agreement (USMCA) trade pact to deflect attention from the impeachment effort.

Trump is seeking to shore up support in swing states like Pennsylvania, which he won by less than 1 percentage point in 2016, visiting the state often ahead of the November 2020 election.

Pennsylvania, one of three “Rust Belt” states Trump won with votes from white, blue-collar voters who had previously supported Democrats, is seen as key to keeping control of the White House, along with Michigan and Wisconsin.

“We’re gonna win Pennsylvania,” Trump said at the rally, which was momentarily interrupted by a protester waving a pink sign that read “grabbing power back.”

“Get her out,” Trump said. “We don’t want to be politically correct,” he added.

On Tuesday, Trump called the probe a hoax and disparaged Biden for forgetting the names of states in which he was campaigning. Biden is one of the leading candidates in the Democratic primary race.

In his wide-ranging speech, Trump referenced a report released this week by the Justice Department’s inspector general that found it was proper to investigate Trump’s campaign, saying “they spied.”

Trump has been on a three-year quest to revamp the 1994 North American Free Trade Agreement, which he has blamed for the loss of millions of U.S. manufacturing jobs.

Trump faced opposition from Pelosi and other House Democrats who wanted changes to the new deal, including improving enforcement of worker rights. The USMCA has already been signed by the leaders of the three countries, but is also subject to ratification by lawmakers.

But on Tuesday, Pelosi announced an agreement had been reached with the White House as well as Mexico and Canada, the result of a rare show of bipartisan and cross-border cooperation in the Trump era of global trade conflicts.

Still, it was inked the same day Trump became the fourth U.S. president in history to face formal impeachment.