Trump spurns Pelosi handshake, she tears up his speech 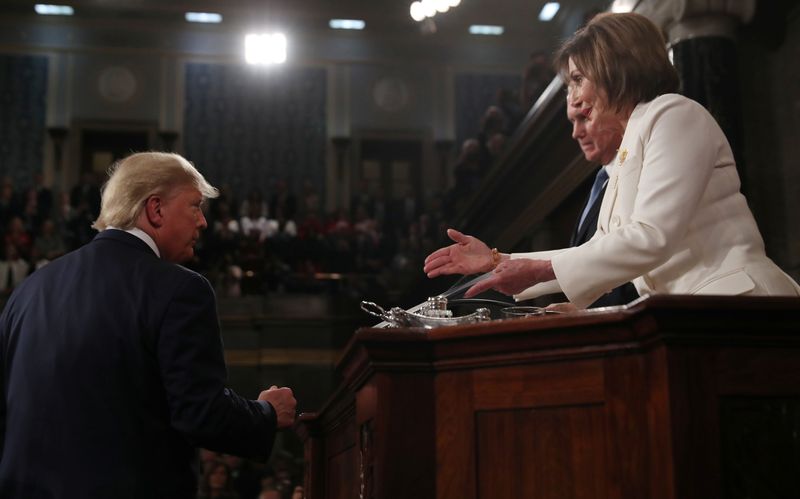 © Reuters. U.S. President Trump delivers State of the Union address at the U.S. Capitol in Washington

WASHINGTON (Reuters) – U.S. President Donald Trump snubbed U.S. House of Representatives Speaker Nancy Pelosi on Tuesday, declining to shake her hand as he handed her a paper copy of his State of the Union speech.

The Republican president spurned the outstretched hand of Pelosi, the Democrat’s leading elected official in Washington, upon meeting her for the first time since she stormed out of a White House meeting four months ago.

Pelosi appeared to be taken aback. Aides to both said they had not spoken since their meeting in October.

She avoided citing the customary “high privilege and distinct honor” that usually accompanies the speaker’s introduction of the president to Congress.

“Members of Congress, the President of the United States” was all she said in introducing Trump, a former real estate mogul and reality TV star-turned-politician.

At the end of his 80-minute speech to a joint session of Congress, Pelosi stood and ripped apart her copy of the remarks he had handed her as millions watched on television.

She later told reporters it was “the courteous thing to do, considering the alternative.”

Kayleigh McEnany, campaign spokeswoman for Trump, said of Pelosi: “Her hatred for @realdonaldtrump has blinded her to the repulsive nature of her smug, elitist behavior.”

In a vote due to begin at 4 p.m. EST (2100 GMT) on Wednesday, the Republican-led Senate was expected to acquit Trump of impeachment charges he abused his powers and obstructed Congress.