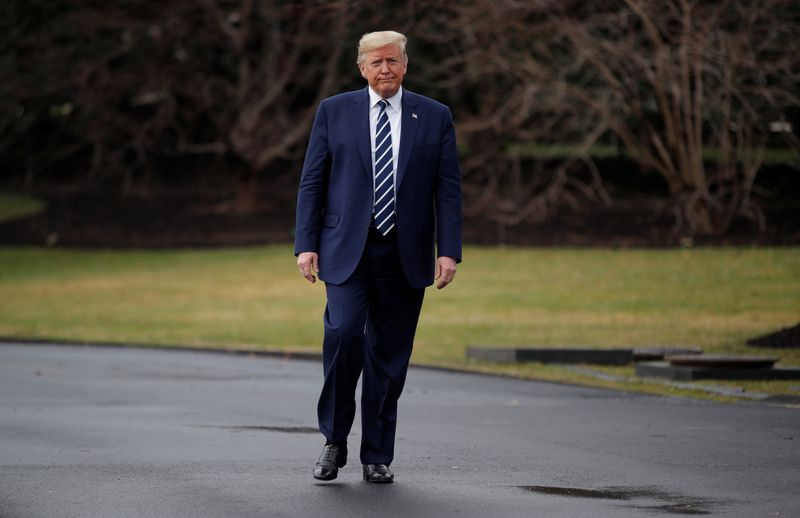 © Reuters. U.S. President Trump departs to attend coronavirus in briefing from the White House in Washington

By Jeff Mason and Steve Holland

WEST PALM BEACH, Fla./WASHINGTON (Reuters) – President Donald Trump loves numbers, and the ones he believes illustrate his accomplishments – an unemployment rate at a 50-year-low and stock markets at record highs – have become touchstones in his speeches, rallies and Twitter missives.

The numbers in the coronavirus outbreak in the United States are increasingly not going his way, but that has not stopped him from portraying them largely as a sign of success.

The United States had almost 550 confirmed cases of the respiratory virus as of Sunday night and 22 related deaths. The count could rise sharply as testing increases this week. More than 3,600 people have died globally.

From suggesting more optimistic time lines for a potential vaccine than scientists say is possible, to contradicting public health officials on the potential for cases to increase, to questioning the fatality rate cited by the World Health Organization, Trump has sought to present figures related to the virus that appear more favorable than reality.

While praising his team’s work to combat the virus, the president, who is seeking re-election in November, has repeatedly cited the relatively low number of infected individuals in the United States as proof of the success of his early ban on foreign nationals flying in from China – where the coronavirus originated – compared with actions taken in other countries with higher numbers of cases.

Critics say Trump’s representation of the numbers related to the spread of the disease is complicating the government’s response.

“The focus on the numbers for numbers’ sake just exposes … they’re not looking around the next corner here,” said Lisa Monaco, a former homeland security adviser to former President Barack Obama. “They’re not preparing the public for what is going to be a substantial spike in the number of cases that we see.”

The White House did not respond to a request for comment.

Tom Bossert, a former homeland security adviser to Trump, said the president deserved credit for having taken action early in what he called the first phase of the response. The next step will be to make sure the figures reflect the seriousness of the threat and spur action to mitigate its risk of spreading.

“It’s not so much about numbers as it is about framing those numbers so that people can understand … the effects these numbers are going to have in real life,” Bossert told Reuters.

“The coming weeks will tell whether we’re able to effectively communicate the seriousness of this outbreak such that public health officials and elected leaders can take … effective measures that might be perceived as inconvenient to the people,” he said.

Trump suggested on Friday that he did not want infected Americans stuck on a cruise ship near San Francisco to be let off the ship and quarantined on land because it would increase the count of infected people in the country. Health experts recommended the people disembark.

Experts say Trump’s focus on numbers could have dangerous ramifications, both by overshadowing critical and accurate information about the severity of the outbreak to the American public and by signaling to government workers they should not explore or report the full extent of the problem.

“There is always a tendency in government to self-censor depending on what the president would or would not go for,” said Jeremy Konyndyk, a senior fellow at the Center for Global Development, who helped lead the U.S. response to the Ebola outbreak. By saying he wants to keep the numbers down, Trump is “signaling what’s off the table,” to federal workers, he said.

When Trump predicted that a vaccine for the coronavirus would be available in a matter of months, a top adviser quickly corrected him.

“A year to a year and a half,” insisted Anthony Fauci, the infectious disease expert who is a key adviser on the government’s coronavirus task force.

As Vice President Mike Pence was photographed touching elbows with people rather than shaking their hands on a trip to hard-hit Washington state on Thursday, Trump told a Fox News Channel town hall that he was not worried about shaking hands.

After Trump insisted to reporters that the American economy would absorb the shock and bounce back quickly, his top economic adviser, Larry Kudlow, acknowledged that a number of stimulus measures were being considered to try to stabilize the economy.

Fears surrounding the virus have shaken the stock market, long a source of pride for Trump. Since its record closing high on Feb. 19, Wall Street’s benchmark has lost more than 12%, wiping out $3.43 trillion from its market capitalization.

The White House defended his approach, saying Trump sees his role as boosting morale and giving people confidence that the crisis will recede.

“The president’s job is to be the leader and to express calm and control. That’s what he’s doing,” one White House official said.

Stephen Morrison, director of the Global Health Policy Center at the Center for Strategic and International Studies, said Trump’s ability to control the situation and the numbers was limited.

“Pandemics don’t really care what numbers people use. They just march on,” he said. “There are lots of other people out there counting what’s going on and increasingly … getting extremely alarmed at the lack of preparedness for what lies ahead.”