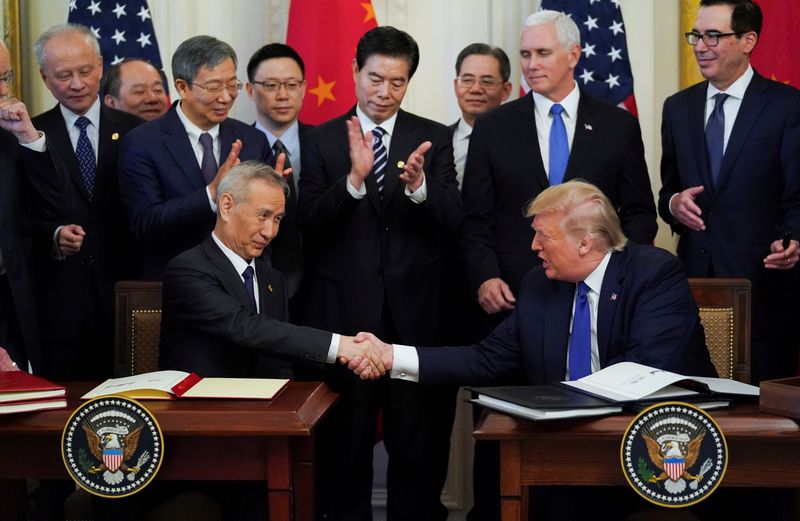 © Reuters. Chinese Vice Premier Liu He and U.S. President Donald Trump shake hands after signing “phase one” of the U.S.-China trade agreement at the White House in Washington

By David Lawder and Andrea Shalal

WASHINGTON (Reuters) – The United States and China announced an initial trade deal on Wednesday that will roll back some tariffs and boost Chinese purchases of U.S. goods and services, defusing an 18-month conflict between the world’s two largest economies.

Beijing and Washington have portrayed their “Phase 1” agreement as a momentous step after months of start-stop talks punctuated by tit-for-tat tariffs that uprooted supply chains and stoked fears of a further slowdown in the global economy.

“Together we are righting the wrongs of the past and delivering a future of economic justice and security for American workers, farmers and families,” U.S. President Donald Trump said as he touted the deal in rambling, partisan remarks at the White House alongside Chinese Vice Premier Liu He and other officials.

The centerpiece of the deal is a pledge by China to purchase at least an additional $200 billion worth of U.S. farm products and other goods and services over two years, over a baseline of $186 billion in purchases in 2017.

Officials from both countries have touted the deal as ushering in a new era for U.S.-Sino relations, but it fails to address many of the structural differences that led the Trump administration to start the trade war in the first place.

They include Beijing’s long-standing practice of propping up state-owned companies, and flooding international markets with low-priced goods.

Trump, who has embraced an “America First” policy aimed at rebalancing global trade in favor of U.S. companies and workers, said China had pledged action to confront the problem of pirated or counterfeited goods, and that the deal included strong protection of intellectual property rights.

But some analysts have expressed skepticism it will set U.S.-China trade on a new trajectory.

“I find a radical shift in Chinese spending unlikely. I have low expectations for meeting stated goals,” said Jim Paulsen, chief investment strategist at Leuthold Group in Minneapolis. “But I do think the whole negotiation has moved the football forward for both the U.S. and China.”

The Phase 1 deal, reached in December, canceled planned U.S. tariffs on Chinese-made cellphones, toys and laptop computers and halved the tariff rate to 7.5% on about $120 billion worth of other Chinese goods, including flat panel televisions, Bluetooth headphones and footwear.

But it will leave in place 25% tariffs on a vast, $250 billion array of Chinese industrial goods and components used by U.S. manufacturers.

Trump, who has been touting the Phase 1 deal as a pillar of his 2020 re-election campaign said he would agree to remove the remaining tariffs once the two sides had negotiated a “Phase 2” agreement. He added that those negotiations would start soon.

He also said he would visit China in the not-too-distant future.