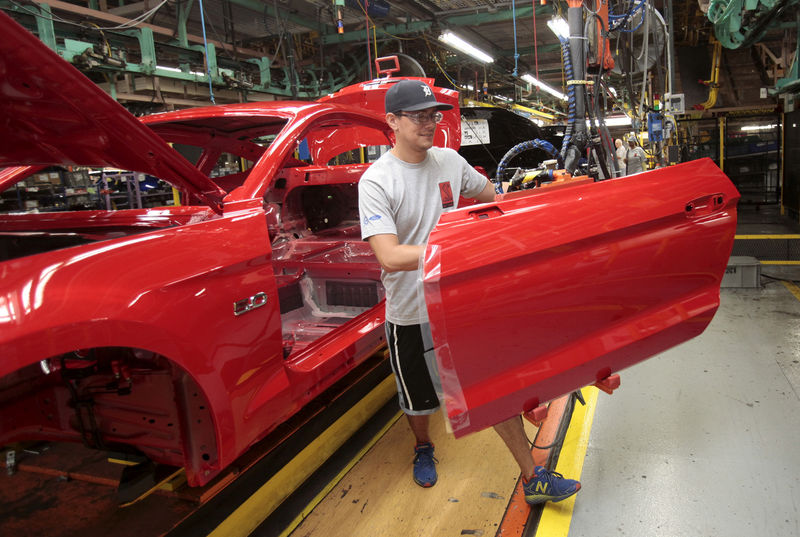 WASHINGTON (Reuters) – U.S. retail sales unexpectedly fell in April as households cut back on purchases of motor vehicles and a range of other goods, pointing to a slowdown in economic growth after a temporary boost from exports and inventories in the first quarter.

The moderation in economic activity was underscored by other data on Wednesday showing a drop in industrial production last month as manufacturers, especially in the automotive sector, worked off stockpiles of unsold merchandise.

Following the weak reports on Wednesday, the Atlanta Federal Reserve cut its second-quarter gross domestic product (GDP) growth estimate to a 1.1% annualized rate from a 1.6% pace. The economy grew at a 3.2% rate in the January-March period.

“Not a great start to the current quarter,” said Sal Guatieri a senior economist at BMO Capital Markets in Toronto.

The Commerce Department said retail sales slipped 0.2% last month after surging 1.7% in March, which was the largest increase since September 2017. Economists polled by Reuters had forecast retail sales gaining 0.2% in April. Retail sales in April increased 3.1% from a year ago.

The National Retail Federation blamed the downbeat sales on slower tax refunds and the weather, including flooding in the Midwest, and “blizzards and extreme temperature swings” elsewhere. Given the stock market rout and cooler temperatures in May, which could have delayed summer purchases, a strong rebound in retail sales in unlikely.

“Whatever caused last month’s disappointment, the general backdrop for consumers still looks pretty favorable,” said Michael Feroli, an economist at JPMorgan (NYSE:) in New York. “But the quarter got off to a rough start, and we estimate real consumption was down 0.2% last month.”

The dollar was little changed against a basket of currencies, while U.S. Treasury prices rose. Stocks on Wall Street turned higher after a report that Trump might delay a decision to impose auto tariffs.

Slower consumer spending early this year led to a build-up of inventories, which is putting pressure on industries.

In a separate report on Wednesday, the Federal Reserve said industrial production fell 0.5% in April after rising 0.2% in March. The third drop in production this year was led by manufacturing. Output at factories declined 0.5% as motor vehicles and parts production tumbled 2.6%.

Manufacturing production was unchanged in March.

Automobile assembly plants are cutting back production as slowing sales have led to a glut of vehicles in showrooms.

Production was also hammered by a 1.8% tumble in aircraft and parts output last month. The drop, which was the largest since 2013, probably is the result of Boeing (NYSE:) cutting production of its troubled 737 MAX aircraft.

“We expect manufacturing to remain under pressure in the coming months,” said Sarah House, a senior economist at Wells Fargo (NYSE:) Securities in Charlotte, North Carolina.

“The latest escalation in the trade war between the United States and China is not likely to immediately show up in next month’s production figures … but disarray to global supply chains and heightened levels of uncertainty are likely to negatively impact investment.”

Another report from the Commerce Department on Wednesday showed motor vehicle and parts inventories rising 7.8% year-on-year in March, keeping the inventory-to-sales ratio at an elevated 2.29 months.

With the retail sales report showing sales at auto dealerships dropping 1.1% in April, the inventory overhang could last for a while. Weak auto sales combined with a 0.2% fall in online and mail-order sales and a 1.9% tumble in building materials and garden equipment receipts to hold down retail sales in April.

There were also declines in sales at clothing stores and those selling personal grooming products. Sales at furniture outlets were flat. But receipts at service stations increased 1.8%, likely boosted by more expensive gasoline. Sales at bars and restaurants also rose moderately last month, as did receipts at hobby, musical instrument and book stores.