5 Things to Watch for in Global Markets in 2020 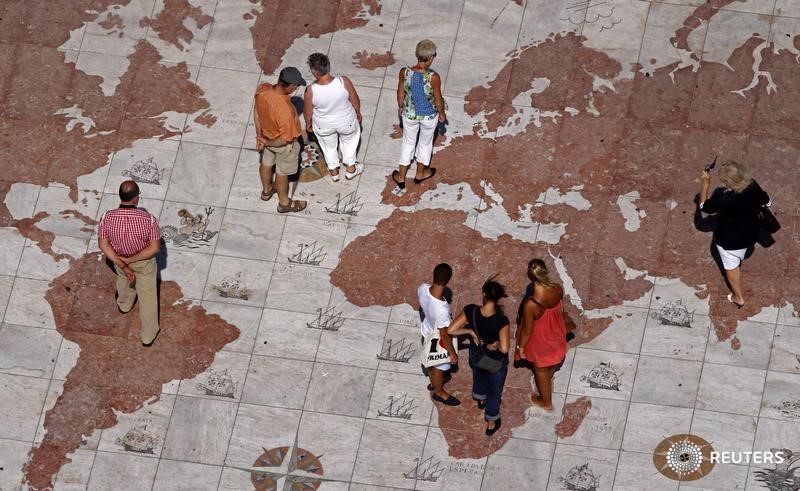 Investing.com — The trade war between the U.S. and China will continue to weigh on the world economy and Donald Trump will lean on the Fed to keep the economy going as he prepares for re-election. Those factors and the thorny issue of relations with the U.K. post-Brexit will combine to frustrate the European Central Bank’s efforts to revive the euro zone. Oil prices may fall unless OPEC and Russia do more to rein in output, meanwhile in the U.S., Netflix (NASDAQ:) will battle Disney , Apple (NASDAQ:) and others to defend its position in an ever-broader Streaming War. Here’s a taster of what awaits financial markets in 2020.

1. No end in sight to the U.S.-China struggle for supremacy

The trade war between the U.S. and China, which hobbled the world economy almost single-handedly in 2019 is likely to leave deep marks on 2020 too.

The International Monetary Fund estimated in October that the tariffs imposed by both sides, and the far-reaching uncertainty they have caused, will shave $700 billion of value off the world economy next year, the equivalent of 0.8% of global gross domestic product.

The end result may be less extreme, given the apparent progress in talks earlier in December, in which China agreed in principle to raise its purchases of U.S. farm goods in return for a partial reversal of import tariffs on some goods it sells to the U.S. There is still no date for a signing ceremony, and neither side has published a draft text of the deal, but tariff cuts agreed last weekend by the Chinese government look designed to smooth the way for it being done early in January.

However, even after that, most existing tariffs will remain in place. As long as key issues such as intellectual property rights and government subsidies are addressed by China, a return to the status quo ante seems highly unlikely, while other fronts of engagement – notably Hong Kong, North Korea and Taiwan – could flare up at any time.

That’s especially true now that the Democratic Party’s presidential candidates are signalling a willingness to confront China on issues from trade to human rights and technological supremacy – showing that whoever is in the White House by the end of 2020, the trade war – in some guise – will still be going strong.

2. Election to cast a long shadow over the Fed

The U.S. Presidential election in November will cast a long shadow ahead of itself in the months running up to it – a shadow that will cover the Federal Reserve among many others.

Opinion polls and bookmakers give President Donald Trump an even chance of re-election (assuming he survives the current impeachment process), something that would pave the way for another four years in which trade and fiscal policy are the cardinal factors for market developments, with the Federal Reserve reduced to the role of cushioning any shocks – whether to the upside or downside – that those policies generate.

For now, Investing.com’s sees the key fed funds rate target range ending 2020 where it will start it – at 1.50%-1.75%. But that depends largely on what policy choices Trump makes between now and November.

If Trump chooses to avoid escalating the trade war, then U.S. inflation is likely to rise under the influence of a tight labor market and a $1.2 trillion budget deficit. Upward pressure on U.S. interest rates will start at the long end of the bond market, while fresh presidential browbeating via Twitter will keep U.S. short rates anchored, as the Fed hesitates to take action that may come across as politicized in an election year.

If, by contrast, Trump feels the need to energize voters with aggressive actions toward China (or indeed the EU, Mexico, Canada or elsewhere), then the Fed may have to pull out another ‘insurance’ rate cut.

Investing.com’s Fed Rate Monitor Tool sees a total of one 25 basis point cut as the second most likely outcome for 2020 at present.

3. A long time ago, in a Hollywood boardoom far, far away…

Forget Star Wars – 2020 will be the year that the streaming wars are unleashed in all their fury.

The year will start with Reed Hastings’ Netflix (NASDAQ:) defending a very handy first-mover advantage – it currently has just under 160 million subscribers worldwide and is very much the first name that comes to mind in the space of on-demand video streaming.

However, that position is under threat from deep-pocketed rivals, with both Apple (NASDAQ:) and Walt Disney (NYSE:) having launched rival services in November. Disney, with its unparalleled back catalogue and its dominance of live sports programming, is set to be a particularly tough competitor. CEO Bob Iger says he’s targeting 90 million subs by 2024. The first 10 million signed up on day one.

Comcast (NASDAQ:) and AT&T (NYSE:) will enter the fray next year: NBCUniversal’s Peacock offering is due for launch in April and WarnerMedia’s HBO Max is due in May. And as with so many other sectors, Amazon.com (NASDAQ:) remains a potentially powerful and margin-crushing competitor.

The good news is that most analysts see plenty of room in the market for multiple providers. The less good news is that no-one knows exactly at what price point that room starts to shrink. Disney has had to undercut Netflix (NASDAQ:) substantially to guarantee escape velocity for its service. Later launchers may find that problem even more acute.

And yet arguably none of the companies lining up to provide those content services has as much of a challenge as Roku (NASDAQ:), which specializes in smart TVs tailored for streaming platforms. After quadrupling in 2019, its shares are trading at a multiple of 15.2 times expected 2019 revenue. That might be the hardest billing of all to live up to.

The global oil market faces a difficult start to 2020, as sluggish world growth continues to ensure that supply grows faster than demand.

The agreement earlier this month by the Organization of Petroleum Exporting Countries and its partners, notably Russia, to cut supply by a further net 500,000 barrels a day from January through March has convinced traders there will be no immediate glut. Even so, the International Energy Agency says global stockpiles could grow at 700,000 barrels a day in the first quarter of the year.

“The OPEC cuts didn’t fully solve the problem,” says Bjørnar Tonhaugen, head of oil market research at Rystad Energy. “Instead they offer a light bandage to get through the first quarter of 2020.” After that, he says, fears of over-supply will surely revive.

That’s reflected in the U.S. Energy Information Administration’s prediction of an average crude price of just over $55/barrel for U.S. benchmark West Texas Intermediate next year, and $60.51/barrel for the global benchmark .

Those prices mean that for many U.S. shale producers, life will stay precarious. Their bigger integrated rivals, meanwhile, face higher costs of capital as politicians and investors pressure the sector to expose more clearly the Climate Change risks embedded in its business models.

Pricing and capital costs means U.S. production growth is set to slow to 900,000 barrels a day next year, according to government forecasts. That’s down from 1.3 million b/d this year and 1.6 million b/d in 2018. For the first time in at least three years, the U.S. will not meet all incremental global demand on its own. The IEA expects world oil demand to rise by an average of 1 million barrels a day over 2020.

The dead hand of trade uncertainty will continue to weigh on the European economy, frustrating the European Central Bank’s exit from its policy of negative interest rates, putting further pressure on the profitability of the Eurozone banking system, and keeping a cap on the in the foreign exchange markets.

Trade hazards are many, and ways around them are few. Higher U.S. tariffs on China have deterred business investment in both countries, hitting Eurozone exports of capital goods. The EU is also the obvious next target for any new trade offensives if the Trump administration declares a truce with China ahead of the election.

Nor is the EU likely to take recent U.S. tariffs in relation to Airbus subsidies lying down: the World Trade Organization will likely allow it next year to levy tariffs of its own on U.S. companies in return for hidden subsidies to Boeing (NYSE:).

Finally, there is the fate of relations between the EU and U.K., which will leave the bloc at the end of January. U.K. Prime Minister Boris Johnson has signalled he wants a trade deal by the end of 2020, when the transitional phase of his Withdrawal Agreement is set to end. That sets the stage either for some frenzied negotiating or, more likely, a trade agreement that will be done in stages, each one doing just enough to stop a disorderly disruption of trade and financial flows between the two. Even so, the threat of such a scenario will be constantly depressing confidence and demand at the margins, ensuring that , too, struggles to build on the gains of the last quarter.