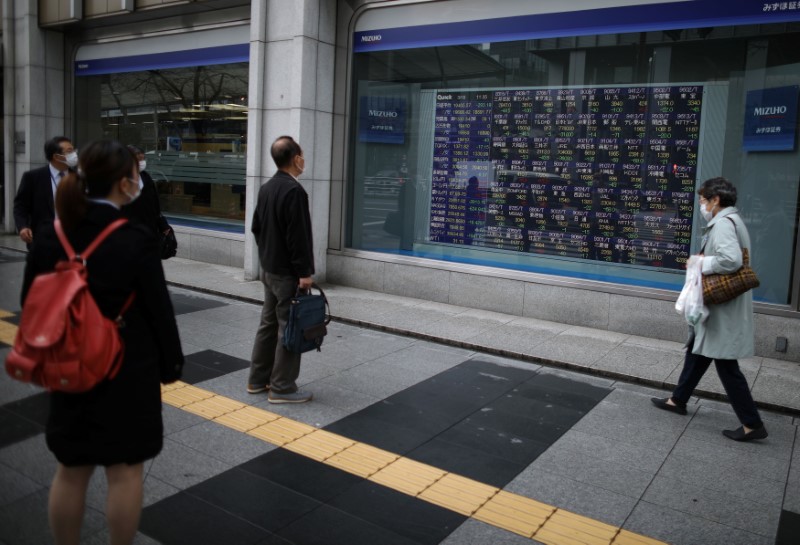 TOKYO (Reuters) – Asian shares extended their rally on Wednesday in the wake of Wall Street’s massive rebound as the U.S. Congress appeared closer to passing a $2 trillion stimulus package to mitigate the economic blow from the coronavirus pandemic.

“Japanese shares have been bolstered by aggressive buying from the Bank of Japan and pension money this week. That has prompted hedge funds to cover their short positions,” said Norihiro Fujito, chief investment strategist at Mitsubishi UFJ Morgan Stanley (NYSE:MS) Securities.

On Tuesday, MSCI’s gauge of stocks across the globe (MIWD00000PUS) rallied 8.39%, the largest single-day gain since the wild swings seen during the height of the global financial crisis in October 2008. It rose another 0.8% in Asia on Wednesday.

Yet, much of the large gains in stock markets pale in comparison with the brutal selloff of the past few weeks as investors braced for a deep global recession in the wake of sweeping lockdowns in many countries.

U.S. S&P500 is still down almost 28% from its record peak hit just over a month ago. Wall Street futures were down 1.1% in early Asian trade.

“I suspect the outlooks have sunk in among market players already and that the bear market has run about 80% of its course for now.”

Senior Democrats and Republicans in the divided U.S. Congress said on Tuesday they were close to a deal on a $2 trillion stimulus package to limit the economic damage from coronavirus pandemic. But it was unclear when they would be ready to vote on a bill.

Investor fears about a sharp economic downturn appear to be easing somewhat after the U.S. Federal Reserve’s offer of unlimited bond-buying and programs to buy corporate debt.

“Companies will see their revenues sink and indebted firms will have trouble securing cash, so governments are making the right responses,” said Akira Takei, senior fund manager at Asset Management One.

“The question is, while those responses are necessary in the near term, what if this continues? You can’t keep helping companies that continue to make losses. The longer this drags on, the more likely we will need to adjust to a new normal.”

The biggest uncertainty is on how countries can slow the pandemic and how quickly they can lift various curbs on economic activity.

U.S. President Donald Trump pressed his case for a re-opening of the U.S. economy by mid-April.

But that met immediate scepticism given the rise of infections in the United States is now among the highest in the world, with the total cases reaching more than 50,000, doubling in less than 3 days recently.

In particular, its financial hub of New York City suffered another quick and brutal rise in the number of infections to around 15,000, raising worries about shortage of hospital beds.

In the currency market, the dollar has slipped as a greenback liquidity crunch loosened slightly.

Gold ticked up 0.3% to $1,614.5 per ounce after having soared almost 5%, its biggest gains since 2008, on Tuesday. It was in part helped by concerns lockdowns in major producer South Africa could disrupt supply.

The market remained pressured by a flood of supply after Saudi Arabia started a price war earlier this month, a move that dealt a crushing blow to markets already reeling from the pandemic.