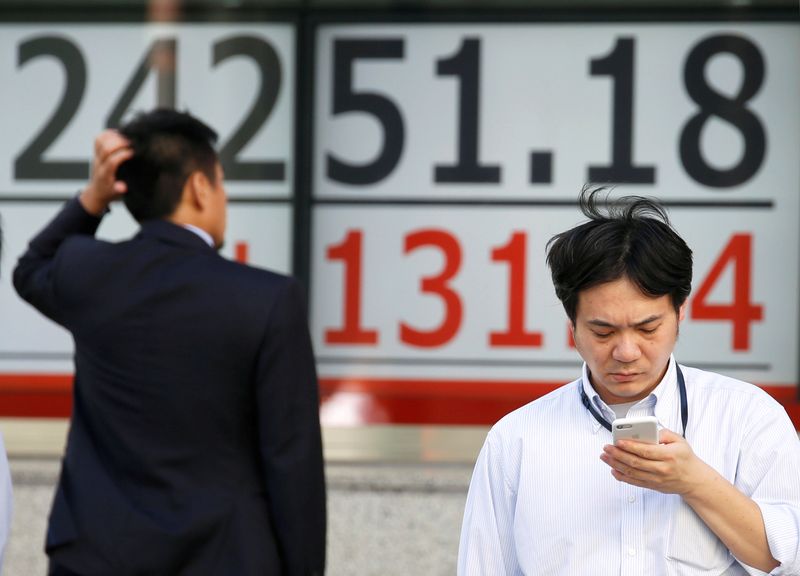 © Reuters. Men stand in front of an electronic board showing Japan’s Nikkei average outside a brokerage in Tokyo

By Wayne Cole and Swati Pandey

SYDNEY (Reuters) – Asian shares snoozed near 18-month highs on Friday as trade thinned in the run-up to Christmas and investors seemed content to digest the chunky gains already made so far this month.

E-Mini futures for the () were at all-time highs, having risen 1.2% in the week.

MSCI’s broadest index of Asia-Pacific shares outside Japan () were steady after rising 1.2% so far this week and almost 5% this month.

Japan’s Nikkei () reversed early gains after reaching a 14-month high earlier in the week. It was ahead by 2.5% for the month so far.

Chinese shares were slightly stronger with the blue-chip CSI300 () up 0.2%.

“This year Santa seems to have come a bit early and markets are a bit overbought,” said Shane Oliver, Sydney-based chief investment manager at AMP.

“Our best guess though is that shares will continue to push up into year end reflecting the positive seasonal tailwind, but with the risk of a short-term pull back early in the new year.”

Sentiment got a boost after U.S. Treasury Secretary Steven Mnuchin said the United States and China would sign their Phase One trade pact in early January.

Mnuchin said the documentation was completely finished and just undergoing a technical “scrub,” though Beijing has so far dodged all details of the deal.

The S&P 500 hit a sixth straight record high, its longest streak since January 2018, and the Nasdaq rose for the seventh session in a row. All three major U.S. indexes – S&P 500, Nasdaq and – notched record closing highs.

It was mostly quiet in currencies, though sterling was nursing a grudge after suffering a vicious reversal that left it facing its worst weekly fall since late 2017 at 2.4%.

On Friday, the pound was huddled at $1.3020 having toppled from a $1.3514 peak when Prime Minister Boris Johnson used his sweeping election victory to revive the risk of a hard Brexit.

“We see the biggest risks being to depreciation over the next two weeks as Brexit preparations take place amidst the most sluggish UK economy in 10 years,” said Richard Grace, chief currency strategist at CBA.

“GBP can fall because the trade concerns are taking place at a time when the UK trade deficit is the widest it has been in 10 years, and the current account deficit is at a historically large 5.0% of GDP.”

Against a basket of currencies, the dollar had edged up 0.3% for the week to 97.438 (), thanks mainly to the steep drop in sterling.