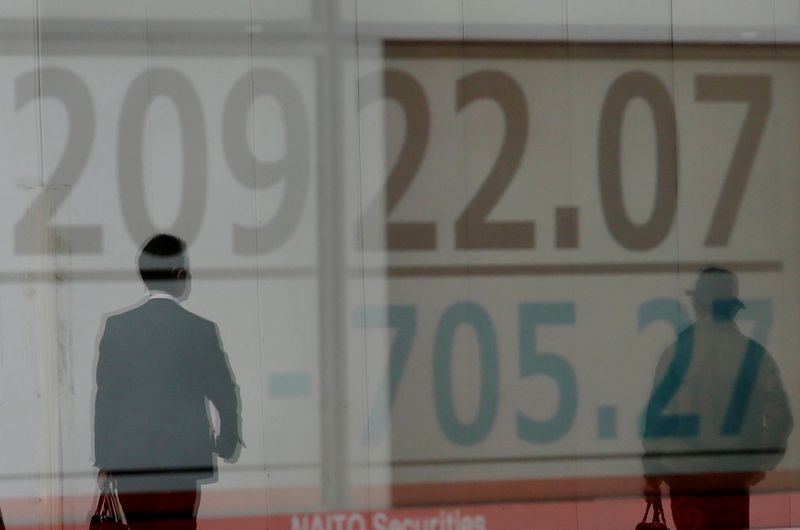 © Reuters. FILE PHOTO: Men are reflected on an electronic board showing the Nikkei stock index outside a brokerage in Tokyo

MSCI’s broadest index of Asia-Pacific shares outside Japan () had touched its highest point since June 15, 2018 in early trade, but fell after reports of the air strike emerged. It was last down 0.26%.

China’s CSI300 index, one of the world’s best-performing indexes last year, also turned negative, losing 0.25%. Australian shares () were 0.66% higher, but that was off earlier highs.

“It remains very unclear exactly what impact (the U.S. strikes) could have on the equity market,” said Tapas Strickland, director of economics and markets at National Australia Bank.

“It is significant that one of Iran’s top military generals was reported to have been taken out … but it all hinges on what Iran does in terms of retaliation,” he said.

Middle Eastern tensions upset a rally for the MSCI index, which finished at its highest close in more than 18 months on Thursday.

It had been lifted by a New Year’s Day announcement from China’s central bank that it would cut the amount of cash that banks must hold as reserves, releasing around 800 billion yuan ($114.87 billion).

Against the backdrop of a thaw in trade relations between the United States and China, global markets had seen renewed appetite for risk assets.

“You have from both a policy and trade perspective a favorable framework for … risk assets for the weeks to come,” said Frank Benzimra, head of Asia equity strategy at Societe Generale (PA:) in Hong Kong.

“The issue in our view, and that is the central scenario, is beyond these few weeks – where could we see a further correction?” he said, noting that the United States is unlikely to enjoy further fiscal stimulus before the presidential election in November.

Shares had received further support from data on Thursday showing factory activity in China continued to grow at a solid pace in December, and that business confidence improved.

Markets in Japan remain closed for a national holiday.

But U.S. stock futures pointed to a grim day on Friday after the air strikes, with S&P e-minis () shedding 0.8%.

News of the strikes came after U.S. Defense Secretary Mark Esper said on Thursday there were indications Iran or forces it backs may be planning additional attacks after Iranian-backed demonstrators hurled rocks at the U.S. embassy in Baghdad following American strikes on Sunday against bases of the Tehran-backed Kataib Hezbollah group.

Esper warned that the “game has changed” and it was possible the United States might have to take preemptive action to protect American lives.

In currency markets, the dollar weakened as investors snapped up safe-haven yen. The greenback fell 0.52% against the Japanese currency to 108.00 .

The U.S. strikes in Iraq and a weaker dollar combined to burnish the value of gold, driving the precious metal 0.75% higher on the spot market to $1,540.25 per ounce, around four-month highs. [GOL/]