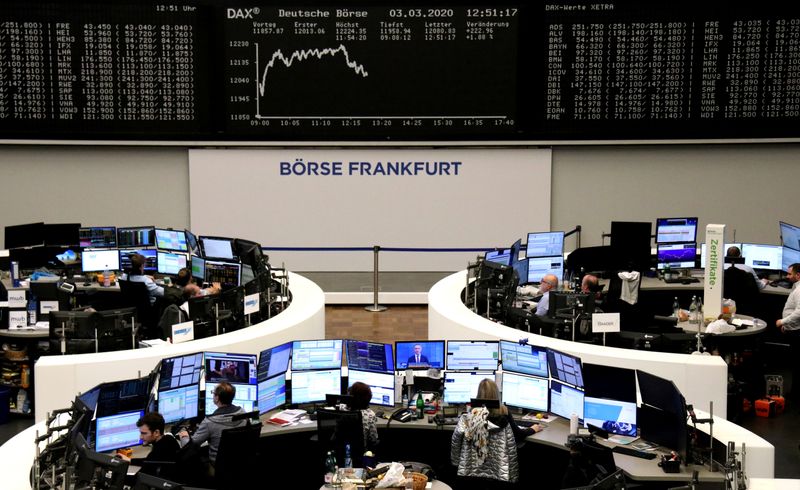 © Reuters. The German share price index DAX graph is pictured at the stock exchange in Frankfurt

(Reuters) – European shares headed lower on Thursday, as a slump in British stocks and profit warnings from several companies soured market sentiment even after central banks this week tried to ease the blow of the coronavirus outbreak on global growth.

Among euro zone stocks, German auto supplier Continental (DE:) slumped 10.5% after it posted a net loss of 1.2 billion euros ($1.34 billion) in 2019, as it suffered from a global downturn in demand for passenger cars.

Airbus shares (PA:) fell 2.8% after Bloomberg reported the company was considering a cut in production of the A330neo jet after its biggest customer deferred deliveries due to a slump in travel demand.

In a sign of deep damage to the travel industry, British regional airline Flybe collapsed, making the struggling carrier the industry’s first big casualty of the outbreak.

Analysts firmly expect the European Central Bank to cut interest rates by 10 basis points next week, joining the U.S. Federal Reserve and its peers in Canada and Australia in reducing borrowing costs.

“The Fed has some room to ease further, but Europe doesn’t have a lot of room,” said Artur Baluszynski, head of research at Henderson Rowe.

“If we see a round of disappointing earnings or outlooks this earnings season, we might see markets moving from the narrative of ‘we need easy money’ to ‘we need some serious fiscal stimulus'”.

The outbreak shows little signs of peaking globally, with Italy closing all schools and California declaring a state of emergency.

Ratings agency S&P Global (NYSE:) halved its eurozone growth forecast for the year to 0.5% from 1% on Wednesday and predicted a 0.3% contraction for hard hit Italy.

British commercial broadcaster ITV (L:) fell 9.0% after warning that ad revenue for April could fall by about 10% as travel companies deferred campaigns.

Among stocks in the black was science and technology company Merck KGaA (DE:), rising 2.8% after it forecast “strong” growth core earnings for 2020.