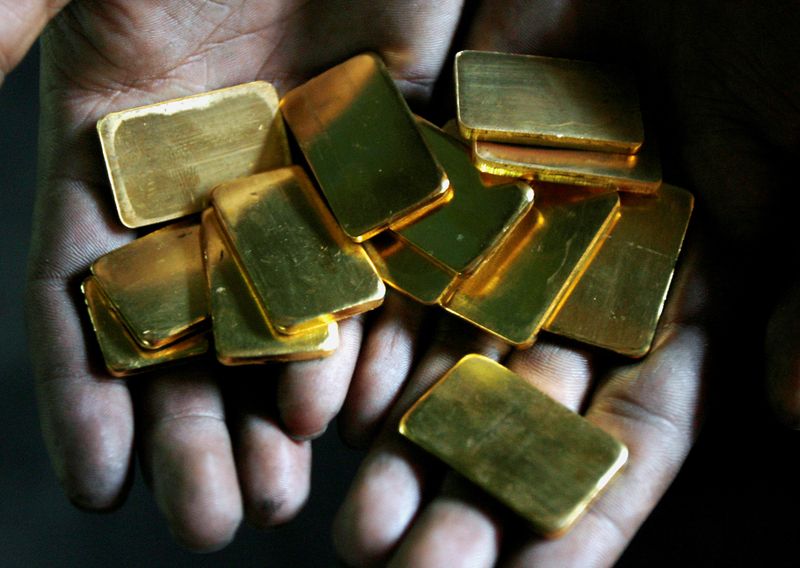 NEW YORK (Reuters) – A rush to safety amid a massive drop in stocks has stretched prices for haven assets, leaving investors fewer places to hide in the wake of a freshly-minted bear market.

Treasury yields stand near record lows, reflecting investors’ thirst for U.S. government bonds in the wake of a stock decline that has seen the S&P 500 give up more than 20% from its record high. The Japanese yen and Swiss franc have both touched multi-year highs against the dollar in recent days, while gold prices hit a seven-year peak earlier this month.

That avalanche of buying has skewed the normal trading patterns of many haven assets, leaving investors vulnerable to unexpected price swings and periods of illiquidity, adding an extra dimension of risk to a market already fraught with pitfalls.

Gold often a popular destination in down markets – fell 3.5% during Thursday’s nearly 10% selloff in the S&P 500 (). The move was likely prompted by investors liquidating their holdings in the metal to meet financing requirements on leveraged positions elsewhere in their portfolio, said Arnim Holzer, macro and correlation defense strategist for EAB Investment Group.

Prices for the metal fell another 3.3% and Treasury yields shot higher on Friday, amid a sharp selloff in haven assets and a rebound in stocks after U.S. President Donald Trump opened the door to providing what he said would be about $50 billion in federal aid to fight the disease.

Meanwhile, liquidity in the $17 trillion Treasuries market has deteriorated to its worst levels since the financial crisis, traders said. Some market participants have in recent days complained of being unable to get a satisfactory market price, a result of too many buyers and not enough sellers.

“The U.S. Treasury bond market is supposedly the most liquid of the financial markets (except the FX market). Yet yesterday there were reports that there was diminishing liquidity in important sectors of the market. That’s unprecedented,” analysts at BDSwiss said in a note to clients on Friday.

The volatility has also extended to the Japanese yen, which earlier this week notched three straight days in which it moved more than 1% against the dollar in either direction, the longest such streak in about seven years.

At the same time, a sustained rise in the Japanese currency could leave it near levels that could prompt the Bank of Japan to curb its strength, some analysts believe. A strong currency tends to make a country’s exports less competitive abroad, an outcome Japan’s struggling economy can ill afford.

Some investors have responded by bulking up on cash, which many regard as one of the safest havens of all. U.S. money market funds took in a record $87.6 billion in the week to Wednesday, data from Lipper showed.

“Sometimes you don’t need to get fancy with your allocations and when looking for a safe haven, cash is king,” said Andrew Thrasher, a portfolio manager for Financial Enhancement Group in Indianapolis. “It’s the one asset we can count on to retain its lack of correlation to equities, bonds, commodities, or whatever is being negatively impacted.”

“I believe, at least on Treasuries and gold, they are still worth owning,” he said. “Those are significant components of our asset allocation strategy and will continue to be.”

Others have had success with options strategies that guard portfolios against outbreaks of volatility, although such trades have become increasingly expensive in recent days.

Mike Tiedemann, chief executive of Tiedemann Advisors, in recent months purchased options that would rise in value if volatility surged in March – a trade that proved prescient. But similar options betting on market volatility later in the year have shot up in value after the market’s recent drop, he said.

“You’re better off just selling equities than trying to hedge now,” he said. “At this point, it’s hard to find value anywhere.”