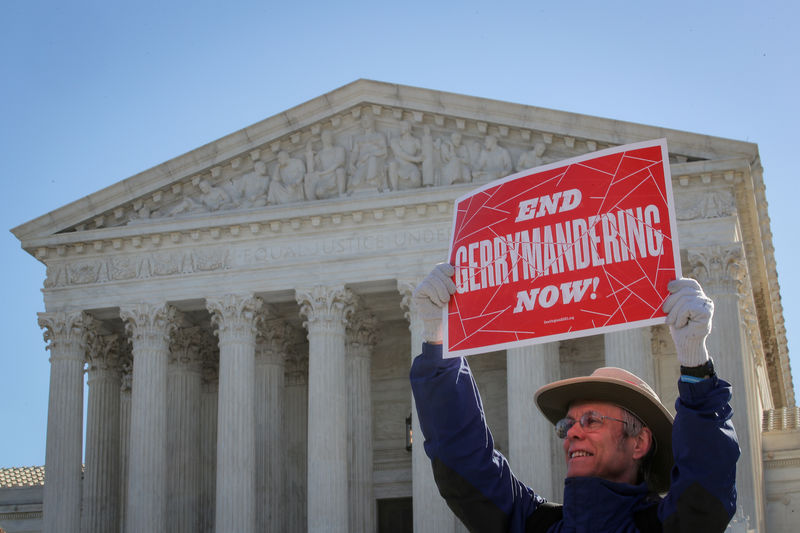 © Reuters. FILE PHOTO: A demonstrator holds a sign during a Fair Maps rally outside the U.S. Supreme Court, in Washington

WASHINGTON (Reuters) – The U.S. Supreme Court on Monday threw out a challenge to Republican-drawn congressional districts in Ohio that Democrats said were drawn to unlawfully diminish their political clout, a move that follows a major ruling by the justices in June that foreclosed such lawsuits.

The court’s action in the case involving a practice known as partisan gerrymandering means that 16 U.S. House of Representatives districts will no longer be reconfigured, as a three-judge panel had ordered in May.

The Supreme Court had put the panel’s ruling on hold ahead of its rulings, issued the next month, in two major gerrymandering cases from Maryland and North Carolina.

The justices in June dealt a major blow to election reformers by saying in its June 27 ruling that federal courts have no role to play in reining in electoral map manipulation by politicians aimed at entrenching one party in power.

The ruling gave the Ohio challengers little option but to concede defeat.

A similar case from Michigan, in which a lower court invalidated nine Republican-drawn U.S. House districts and 25 state legislative districts, was also put on hold by the Supreme Court in May. An appeal in that case remains pending and would be expected to be dealt with the same way as the Ohio dispute.

In partisan gerrymandering, one political party draws legislative districts to marginalize voters who tend to support the other party. The lines are typically redrawn once a decade after the U.S. census, and in many states the party in power controls the decision-making.

Included in the 2012 Ohio electoral map drawn by Republicans at issue in the case was the “Snake on the Lake,” which the judges called “a bizarre, elongated sliver of a district that severed numerous counties,” referring to the state’s 9th district that runs along Lake Erie. The electoral map consistently led to a lopsided advantage for Republicans in U.S. House races.

The League of Women Voters and the American Civil Liberties Union sued to challenge the legality of the map.