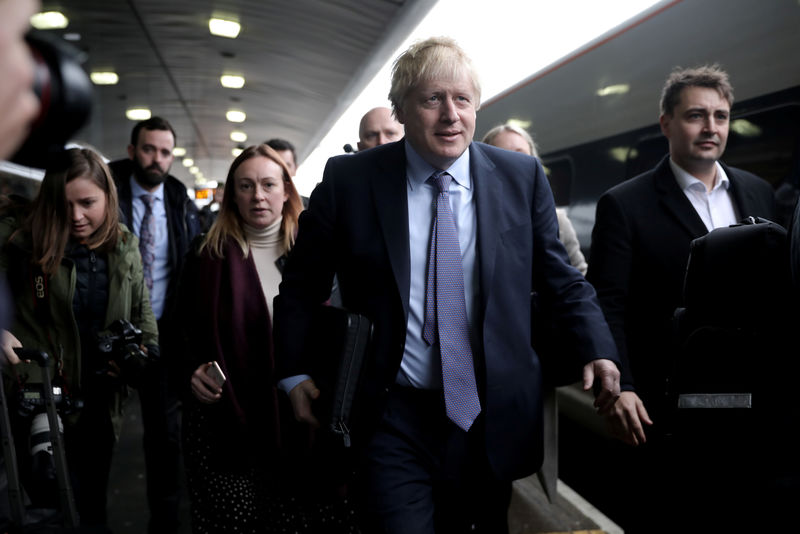 By William James and Kylie MacLellan

TELFORD, England (Reuters) – British Prime Minister Boris Johnson promised on Sunday “to get Brexit done”, with his Conservative Party making an election pledge to bring his deal to leave the European Union back to parliament before Christmas.

With Britain heading to the polls on Dec. 12, the governing Conservatives rolled out an election manifesto that promised more public sector spending and no further extensions to the protracted departure from the EU.

They also pledged no new taxes, drawing a distinction with the opposition Labour Party that has promised to raise taxes on the rich and businesses to fund a major expansion of the state.

But the manifesto offered little detail on other policy areas, with aides wanting Johnson to play it safe after plans on social care in 2017 saw an opinion poll lead enjoyed by his predecessor Theresa May all but disappear.

Johnson is the runaway favorite to win the election, according to opinion polls.

“Get Brexit done and we shall see a pent up tidal wave of investment into this country,” the prime minister said, launching the manifesto in the central English town of Telford.

“Get Brexit done and we can focus our hearts and our minds on the priorities of the British people.”

He also ruled out seeking any further delay to Brexit, saying in his party’s manifesto: “We will not extend the implementation period beyond December 2020”.

Arriving at the Telford conference center, Johnson was welcomed by supporters chanting “Boris” but a little further away, protesters shouted: “Liar, liar, pants on fire”.

Instead, he promised 23.5 billion pounds ($30.2 billion) worth of “sensible” tax cuts and higher spending, including on the National Health Service which would gain 50,000 nurses.

His pledges are dwarfed by Labour’s 83 billion-pound planned spending increase. Johnson, portrayed by the opposition party as being in the pockets of billionaires, said he was targeting his measures toward those who are less well off.

Labour leader Jeremy Corbyn described the manifesto as one “for billionaires. They bought it and you’ll pay for it”.

Think-tanks such as the Institute for Fiscal Studies have raised questions about how both the Conservatives and Labour would fund their plans.

“Business leaders will still want to see value for money from the Conservative spending pledges, and there are some concerns this is turning into a big-spending election,” said Edwin Morgan, director of policy at the Institute of Directors.

“But Tory (Conservative) plans are still well lower than the absolutely massive expansion being advocated by Labour.”

Held after three years of negotiations to leave the European Union since a 2016 referendum, the December election will show how far Brexit has torn traditional political allegiances apart and will test an electorate increasingly tired of voting.

In a heated campaign where the Conservatives have been criticized for disseminating misleading social media posts, Johnson, 55, said “the Twittersphere” was not really his province, trying to deflect any criticism of dirty tricks.

Instead he turned his comments toward Labour’s Brexit position, which he said would result in more delay.

Labour has said it will negotiate a better Brexit deal with the EU within six months that it will put to the people in a new referendum – one that would also offer the choice of remaining in the bloc.

Corbyn has said he would remain neutral in such a vote, something his finance policy chief John McDonnell described as the Labour leader adopting the role of “an honest broker”.

“They want to rip up our deal and negotiate a new one. But we don’t yet know of a single Labour MP (member of parliament) or any other MP who would support this deal,” Johnson said to applause and laughter.

“It would be farcical, it would be comical if the consequences of that approach were not so disastrous for this country and our prospects next year. Let’s give that madness a miss.”