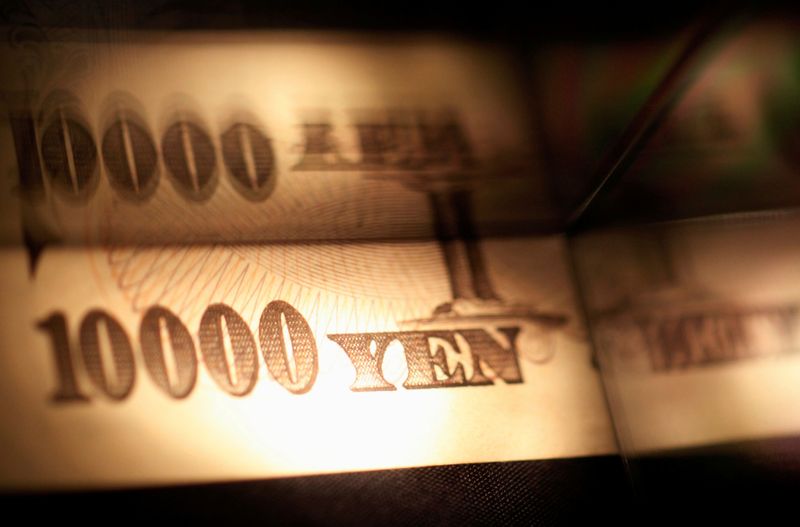 © Reuters. Light is cast on a Japanese 10,000 yen note as it’s reflected in a plastic board in Tokyo, in this picture illustration

NEW YORK (Reuters) – The safe-haven yen slid from three-month highs against the dollar on Wednesday, as U.S.-Iran tensions eased after President Donald Trump signaled there would be no further military action, for now, with Tehran appearing to have pulled back from its threats.

Another safe haven, the Swiss franc, also fell. It had earlier touched a more than one-week peak versus the greenback. Gold, which draws a bid in times of geopolitical stress, also gave up earlier gains, as did .

Trump backed away on Wednesday from days of angry rhetoric against Iran as the two countries tried to defuse a crisis over the American killing of Iranian military commander Qassem Soleimani.

In an address from the White House, Trump said the United States did not necessarily have to respond militarily to Iranian missile attacks on military bases housing U.S. troops in Iraq overnight.

Iran said it had fired missiles at U.S. targets in Iraq in retaliation for last Friday’s U.S. drone strike that killed Soleimani.

“It’s a big sigh of relief for the markets,” said Shaun Osborne, chief FX strategist, at Scotiabank in Toronto.

“The markets were concerned that there was the risk of an escalation. I would be very surprised though that this would be the absolute end of all of this, but the risk of a direct confrontation between the U.S. and Iran seems less of a risk,” he added.

The yen, regarded as a safe haven in times of geopolitical turmoil because of its deep liquidity as well as Japan’s current account surplus, dropped, pushing the dollar to a more than one-week high of 109.19 yen . The dollar earlier fell to a three-month low of 107.66 yen following Iran’s strike, but was last up 0.8 at 109.18 yen.

The dollar also rose against the Swiss franc at 0.9737 franc , up 0.3%, after falling to a more than one-week trough earlier in the global session.

A higher-than-expected U.S. private payrolls number for December also boosted the dollar. The rose 0.3% to 97.30 () in mid-afternoon trading.

“The market still has the ultimate ballast, or anchor, which is the U.S. economy,” said Marc Chandler, chief market strategist at Bannockburn Global Forex. “Even though there’s some variance month-to-month between the ADP and the non-farm payrolls report, the ADP is still a good indicator of the underlying trend.”