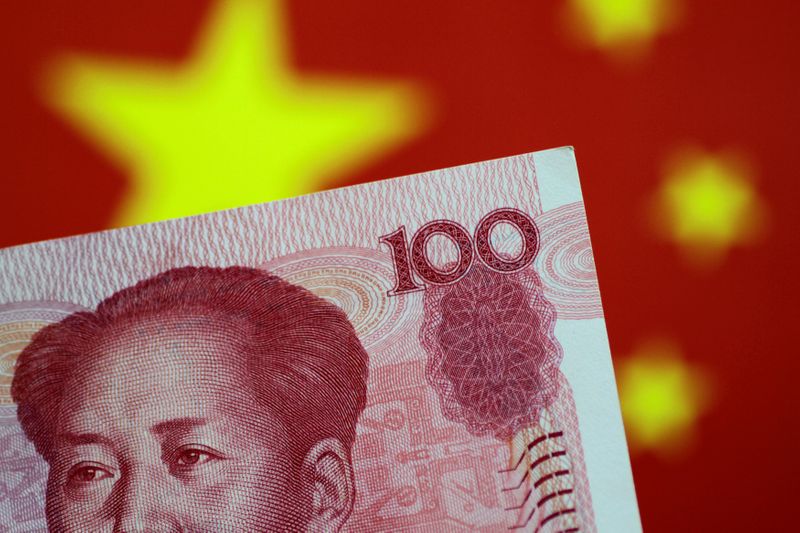 TOKYO (Reuters) – The yuan fell in offshore trade on Monday to its lowest level in three weeks as the death toll in China from the spread of a new coronavirus mounted, raising worries authorities are struggling to contain the outbreak and sparking a bout of risk aversion.

Japan’s currency, often sought as a safe-haven in times of uncertainty, initially jumped versus the dollar to the highest since Jan. 8 before erasing some of those gains as investors gauged public health officials’ response to the virus.

China’s cabinet announced it will extend the Lunar New Year holidays to Feb. 2 to strengthen the prevention and control of the new coronavirus, state broadcaster CCTV reported early on Monday. The holidays had been due to end on Jan. 30.

Hong Kong has also banned the entry of visitors from China’s Hubei province, where coronavirus outbreak was first reported in the city of Wuhan, underscoring the difficulty officials face during a peak travel season.

Health authorities around the world are racing to prevent a pandemic of the virus, which has infected more than 2,000 people in China and killed 80.

There are concerns that tourism and consumer spending could take a hit if the virus spreads further, which would discourage investors from taking on excessive risk.

“There is a lot of uncertainty about how much further the virus will spread, and this is behind the moves in currencies,” said Yukio Ishizuki, foreign exchange strategist at Daiwa Securities in Tokyo.

“I thought dollar/yen would be supported at 109, but it broke through that, so now the next target is 108.50. This risk-off mood is likely to continue for a while.”

In the offshore market, the yuan was under persistent pressure and slumped to 6.9776 per dollar, the weakest since Jan. 6.

Japan’s currency also jumped more than 0.5% versus the Australian () and New Zealand dollars () as worries about the virus drew traders toward safe-haven currencies.

The () against a basket of six major currencies was little changed at 97.881.

Traders said market moves could be exaggerated due to low liquidity, because financial markets in China, Hong Kong, Singapore, and Australia are closed for holidays.

The virus, which emerged late last year from illegally traded wildlife at an animal market in the central Chinese city of Wuhan, has spread to other countries, including Singapore, South Korea, Canada, Japan, and the United States.

China’s National Health Commision confirmed 80 deaths from the coronavirus and 2,744 cases as of end of Sunday.

Singapore’s government said on Monday the virus will hurt its already wobbly economy, and is considering tax breaks for the tourism sector and other firms.

The outbreak has evoked memories of Severe Acute Respiratory Syndrome (SARS) in 2002-2003, another coronavirus which broke out in China and killed nearly 800 people in a global pandemic.

Sterling, the euro, and the dollar were subdued as traders awaited the release of economic data and two central bank meetings.

The Bank of England is closer to cutting interest rates this week than at any time in the last three years when it announces its policy decision on Jan. 30.

Growth at end of 2019 slowed to its weakest since 2012, prompting BOE Governor Mark Carney and two other policymakers to speak publicly about the possibility of a rate cut.

However, monetary easing is far from certain because other data have shown a pick up in business and consumer sentiment.

The dollar was quoted at $1.1028 per euro (), little changed on the day but close to its strongest since December.

The U.S. Federal Reserve is expected to keep policy on hold at a meeting ending Jan. 29. Data on the U.S. housing market, durable goods, and consumer confidence will be released before the Fed’s decision.